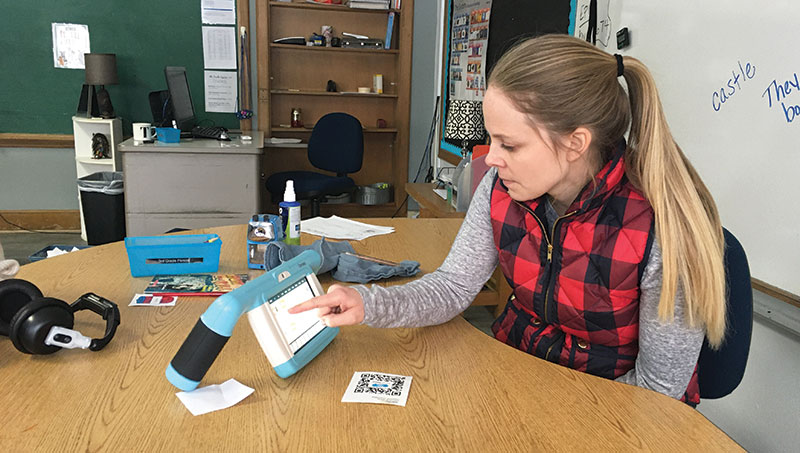 Neveln Elementary EL Teacher Stephanie Garbisch works with a Phrazer device. The technology, originally used in the medical field, is now being used to teach students who are still learning the english language. Tyler Jensen/tyler.jensen@austindailyherald.com

For the last four years, teachers in Austin Public Schools have been using new devices to better work with students, and their parents, who are learning the English language, and the technology is still improving.

The Phrazer devices, produced by GeaCom, were originally made for use in the medical field to communicate with patients who were illiterate or non-English speakers. Now, they are being used as part of the process of teaching English to students.

Currently, the devices use universal signs and pictures to communicate with non-English speakers, telling them if a lesson was successfully completed or if a child still needs to work on something.

One of the ways it is used is to increase communication between teachers and parents, said Neveln Elementary EL Teacher Stephanie Garbisch.

“It’s a way for parents to be involved in their childrens’ schooling,” she said.

Prior to this, Garbisch said she would typically only communicate with parents during conferences or when something was wrong. At those times, she and other teachers had to hunt down interpreters to communicate between them and the parents.

The Phrazers allow teachers to be in contact with parents and let them know how their students are doing and celebrate the child’s successes, Garbisch said.

“It’s kind of a way to take down any barriers that there were,” she said.

As they were piloting the devices four years ago, EL Teacher Nicole Thompson said teachers were able to develop the programming that went on the devices.

One of the things the device does is pronounce words for users, allowing parents to see if their children are pronouncing words correctly, she said. Teachers have also loaded collections of books onto the devices, which means children can read the books at home without teachers worrying about losing a physical copy that other students may need.

According to Thompon, one of the appeals of the device is that it does not require WiFi.

“They don’t go on the internet or get distracted with other things and they don’t need the internet at home to use it,” she said.

Eventually, there are plans to add translation features onto the device which would allow the teachers and parents to have actual conversations. Still, Garbisch said it is already working well.

“I feel so much more connected to the parents,” she said.

The devices also give parents a background into their child’s classes, Thompson said.

Research shows that when parents are engaged with their child’s schoolwork, the student does better, Garbisch said.

In addition to the Phrazer devices, students are also using Kitsune headphone/speakers for classwork. These can either function as headphones, when children are working alone, or as speakers if they are part of a group.

Through the device, parents and support staff like nurses can also communicate.