Michael “Mike” Douglas Corcoran, 63, of Stewartville, Minnesota, passed away on Friday, Jan. 17, 2020, surrounded by his sisters and brothers at Mayo Clinic Hospital, Saint Marys Campus-Rochester. Michael sustained severe injuries from a vehicle accident on Jan. 13, 2020, and never recovered. A tombstone in Ireland bears the anonymous quote, “Death leaves a heartache no one can heal, love leaves a memory no one can steal.” 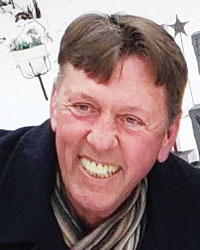 Michael was born on March 22, 1956, in Austin, Minnesota, to Eugene C. and Elizabeth L. (Miller) Corcoran. He had six brothers and sisters, 15 nieces and nephews, several aunts, uncles and countless friends. Mike attended high school in both Austin and Lyle, Minnesota, graduating from Lyle High School in 1973. His career consisted of working as paraprofessional at Austin High School and The Boys Ranch. He was most recently employed by the Rochester Public School District. For Mike, he never had less than two jobs. He bartended at several other places and most recently was working at the American Legion in Bryon, Minnesota, where he had fond memories of co-workers and patrons. His passion for animals was endless. He adored his horses, especially his “Gin.” He loved being with his family at social gatherings and spending time with his lifelong friends. His presence was larger than life, with a booming voice and laugh, that all can recall. His nieces and nephews were a great pride to him; he adored them. Michael, we say to you, we have memories bursting from our hearts that will help us through our time on Earth without you here with us. Until we meet again, we will remember your gleeful smile and love of life. Thank you for your love, Michael; we were blessed to have you in our lives. Rest easy.