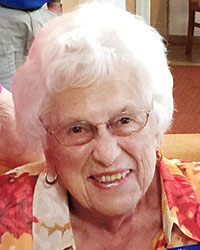 Margaret was born on June 7, 1920, to Emmet and Gena (Bjorgum) Olson on the family farm eight miles north of Jackson, Minnesota. She was baptized on July 10, 1920, and completed her first year of confirmation at Our Savior’s Lutheran Church in Jackson. She completed her second year of confirmation in Peterson, Minnesota, and was confirmed there on Palm Sunday, 1934. She was the fourth of five siblings, having two brothers and two sisters.

Margaret attended school in a one-room country schoolhouse through the eighth grade. Due to the Depression, her first two years of high school were in Peterson, where she lived with her older sister, Beatrice, and Beatrice’s husband, Joe. Her final two years of high school were completed in Jackson. Upon graduation, Margaret worked for a year at the Jackson Courthouse.

In the fall of 1938, Margaret attended her first year of college at Waldorf College in Forest City, Iowa. Following her freshman year, Margaret worked at the bank in Forest City. A year later, her education resumed at St. Olaf College in Northfield, Minnesota, where she received a degree in business education in 1943.

While at St. Olaf, Margaret met her future husband, Glennys Knutson, in a mission study group. When they both graduated in June 1943, Margaret taught school in Jasper, Minnesota, while Glennys served in World War II. In the fall of 1944, Margaret and her sister, Emy, moved to Lakefield, Minnesota, where they both taught school. Glennys returned from Europe in April 1946 and proposed to Margaret that same day. On Aug. 4, 1946, Margaret and Glennys were married.

After their marriage, Margaret supported Glennys during his years at Luther Seminary in St. Paul, Minnesota.  While there, Mary Margaret was born. In July 1949, they moved to Iowa when Glennys accepted a call to become pastor of the Sioux Rapids/Linn Grove parish. Carol Ann and Sandra Jean were born during this time. In 1953, they moved to Austin, where Glennys became the founding pastor of a mission congregation, Our Savior’s Lutheran Church. It was here that their fourth daughter, Barbara Ruth, was born.

After being a homemaker for 20 years, Margaret worked as a secretary at St. Mark’s Lutheran Home for seven years. In 1973, Margaret accepted a position with the Social Security Administration and worked for four years before retiring in 1977. While Glennys was pastor, Margaret volunteered for St. Olaf Hospital Auxiliary, sang in the Our Savior’s Lutheran Church Choir, and was a member of the Lydia Circle. In 2014, she and Glennys moved from Austin to a senior living center in New Brighton to be closer to family. Upon Glenny’s death in September 2017, Margaret moved to her own assisted living apartment. It was here where she passed away.

Margaret’s deep faith was her guiding light. Her favorite song was “Beautiful Savior”; she believed Jesus Christ was her savior and that he would take care of her like a shepherd tends to his sheep. Her children, grandchildren, and great-grandchildren were the source of her greatest joy on this earth. She loved and cared for them dearly. Many wonderful memories were spent at their cabin on Spider Lake in Nevis, Minnesota. Margaret’s Norwegian heritage was important to her and she passed along rich history and traditions to her family. Margaret loved people. She made many friends; even in her last days, she made new friends and learned their names and details about their lives.

Funeral services will be held at 11 a.m. on Tuesday, Jan. 21, 2020, at Our Savior’s Lutheran Church in Austin. Visitation will be from 4-7 p.m. on Monday, Jan. 20, 2020, at Clasen-Jordan Mortuary and will continue for one hour prior to the service on Tuesday at the church.  Interment will be in Oakwood Cemetery. Memorials are preferred to Our Savior’s Lutheran Church E.L.C.A. Missions or the State Services for the Blind of Minnesota (SSB), Attn: Communication Center.