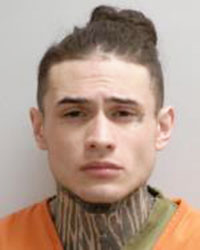 According to the court complaint, a Minnesota state trooper observed a 2008 Pontiac Grand Prix that did not have working license plate lights at about 6:47 p.m. on Dec. 26 in rural Mower County. The trooper initiated a traffic stop at the intersection of County Road 2 and 595th Avenue in Red Rock Township. The trooper saw the passenger was Hardy, who had a warrant for his arrest. The trooper called in the Brownsdale Police Chief, who arrived on scene and arrested Hardy. The female driver was also arrested on suspicion of driving while impaired.

The trooper searched the vehicle and found the following:

Police executed a search warrant on Hardy’s residence on Dec. 31 and found a .38 caliber revolver loaded with six rounds of ammunition in an air vent cover.

A review of Hardy’s criminal record shows prior convictions for assault, drug sales, theft, fleeing a peace officer in a motor vehicle and possession of a weapon on school property.

Hardy will appear in court again on Jan. 16.