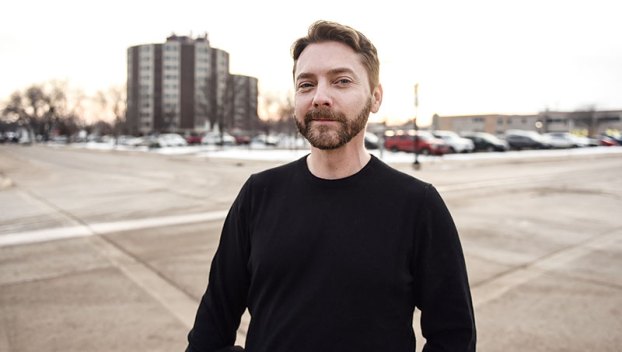 Michael Vereide stands in downtown Austin where he grew up. Vereidi led the team that created the launch campaign this year for Disney+ Streaming Service. Eric Johnson/photodesk@austindailyherald.com

When Disney Plus launched on Nov. 12 of this year, there was very little else in TV and movies that matched the hype for the new streaming service.

It came with a huge amount content from the Disney library as well as the new show set in the “Star Wars” universe, “The Mandalorian.”

It’s likely that you saw ads for this streaming service well before its launch, but what you may not know is that an Austin native headed up the entire launch campaign.

Michael Vereide is the production manager of the marketing and the creative team that was responsible for the launch campaign. If you saw a commercial or billboard advertising Disney Plus then it was Vereide and his team that was behind it.

“Anything that promoted Disney Plus itself, we created,” Vereide said.

Vereide is the son of Marilyn and Woody Vereide and was in town for Christmas to visit them when he took some time and talked about the effort it took to get Disney Plus’s launch off the ground.

The effort it takes to launch any service like this is a huge task to undertake, but it’s Vereide’s situation in general that can be the most eye-opening.

Having worked at Disney for 10 years, he joined Disney Plus in June of 2019, leaving a window of just six months for him and his team to organize, create and launch the entire promotional campaign.

“We’re a very, very small team,” Vereide said. “It’s been a total of five us. Our team makes the static pictures you click on the website, creates all the images for the shows, make sure it gets localized to all the languages, even for places where it’s not local yet, but will be soon.”

And that’s only the tip of the daunting iceberg, especially for a small team that only started with Vereide and another co-worker. They were the team when previously there was no team.

“We started in June and had until Nov. 12 to get it all done and delivered,” Vereide said. “Very daunting to say the least, but we managed to get it done, thankfully.”

How it all started

Vereide started his march toward Disney Plus around the early 2000s. After graduating from Austin High School, we went on to graduate from Southwest Minnesota State University in Marshall, Minnesota, which at the time was called Southwest State University.

It was there, that he graduated with a double major in television production and theater arts, two things that worked well together.

“I was a huge theater nerd here growing up,” Vereide said. “I feel like the two have defiintely complimented me.”

From there he served as an intern at WCCO in Minneapolis for the station’s entertainment reporter, putting together press kits for upcoming interviews and editing the visuals that played behind the reporter when introducing the story.

However, after awhile Vereide realized that the TV news industry wasn’t the right fit and after his internship was up, got out of the business completely, taking some odd jobs here and there and then a job managing a Rocco Altobelli Salon and Day Spa in Minneapolis.

“After my internship, I realized I don’t want to be a reporter. I’m not a newsguy,” Vereide said, realizing that he wanted to get back into production work. “I couldn’t work in this state, but I wasn’t ready to move yet to Hollywood.”

Vereide said it took a little while before reaching the point where it was time to move and it was the realization that many have when ready to chase dreams.

“It took me awhile to kind of realize that I wasn’t happy with what I was doing,” he said. I just decided one day, enough is enough, I have to make this leap. I Don’t want to be ‘what-if.’ I saved up every penny and took the leap and moved out to (Los Angeles).”

And like so many Vereide was literally taking a leap of faith. With no jobs lined up, he bought how-to books that laid out how to make it in Hollywood.

What happened next, it should be cautioned, was a string of events that fit the theatrical mood of Hollywood, but certainly wasn’t how things typically worked.

A week after joining an agency, Vereide got a job as an assistant at the Disney Channel, which he’s now been at for 10 years. It was supposed to only be a one-day job, but toward the end of the day the person he was covering for announced they were resigning to take a new job.

The man for whom Vereide worked and who was also a Minnesota native, asked if he wanted to come back again the day after.

This temp position as an assistant lasted for six months when he was offered the position permanently, but Vereide turned it down.

“I told him, ‘I don’t want to schedule your meetings,’” Vereide said. “My dream really is to work in production. I really want to try and make that happen for myself.”

Another door opened at that moment as the man who Vereide had been assisting told him that a position in marketing and production had opened up and offered him that position.

“I was so incredibly fortunate,” Vereide said laughing. “This is a very very rare situation.”

An example of the promotional work Michael Vereide and his team put out leading up to the launch of Disney Plus. Photo courtesy of Disney

Since the announcement of Disney Plus’s launch, Vereide and his team have been in a near constant state of running.

Days often stretch through and into the late evenings, but the work was paying off and as the launch date approached, the company was already seeing the huge interest the streaming service was generating.

But as the interest increased, the demands of the position increased as well, which in turn increased the challenge the small team faced.

“The plans kept increasing the closer we got to launch because the company was really happy with what we were doing,” Vereide said.

What really ramped up the excitement though was the announcement trailer revealed at the D23 Disney Convention.

“Everybody lost their minds with excitement about it,” Vereide said. “We wanted to go guns-a-blazing. Everybody was so excited. We got about an hour of relaxation for what we had then it was like, ‘oh God.’”

With the increased work, Vereide was able to start bolstering his team’s numbers and started working more with other departments.

Even still, the work was a never-ending cycle of work leading up to the November launch date.

“It was nonstop for the three months leading up to launch,” Vereide said.

Vereide said he would be lying if the work wasn’t stressful and at times felt overwhelming, but it was the confidence in his team that got the job through.

“There were definitely times when every team member had those crisis of confidence in themselves moments,” Vereide said. “You feel that sense of pride but at the same time you think, ‘oh gosh, I can’t screw this up.’ But you calm down and think, ‘you can do it. Everything is going to be great.’”

And it has been. While the work still continues for Vereide and his team as Disney Plus continues adding new content as he jokes, “We can go home at 10 p.m. now some nights. That’s very exciting for me.”

Still the accomplishment for his team in getting Disney Plus launched has been something he has been extremely happy about.

“No rest for the wicked,” he said. “Our very small and mighty team continues to work as hard as we can. It’s been very hard to decompress and relax, I’m really proud. I try to be a fairly humble person, but you forget that what you are doing is going to go live to the world. It takes you back a little bit. I’m just a kid from Austin, Minnesota.”

With the Board not having power to actually stop refugees from moving to Mower County, Tuesday’s question was more about... read more