Never, ever, underestimate the draw of the Lyle Area Cancer Auction.

Not even a blizzard warning could keep people away from the goings on Friday and Saturday in Lyle – and in doing so, pushed the auction’s 41-year total to $3.1 million.

On Sunday, organizers were able to present its 2020 check for $152,500 during the Eagles Cancer Telethon in Rochester.

Co-chairman Larry Ricke said the annual auction is the only event that has been part of the 66 years of the Eagles Cancer Telethon that has never been cancelled.

“Weather affected us some, it dampened a few things during the auction – but considering everything, I am extremely happy with the turnout and total. I am always amazed. It’s just unbelievable.”

Ricke told the Eagles’ audience on Sunday that it took the group 15 years to raise $1 million; however, after having hit the $2 million mark in 2015, it took only five more years to hit over $3 million.

Ricke’s brother-in-law, Gary Ziegler, during their group’s appearance at the telethon, made sure viewers knew that the effort is made up of over 50 events, countless volunteers and big hearts. 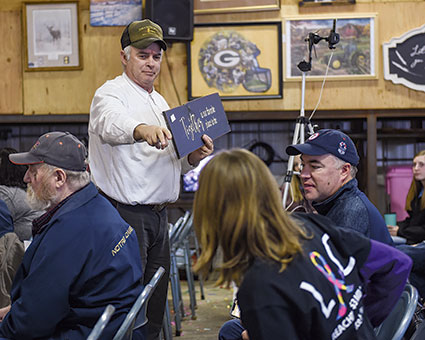 Carl Shirk tries to coax a bid during the second day of the Lyle Area Cancer Auction Saturday in Lyle.

Some of the noted events continued to strengthen the effort, Ricke said on Monday.

The Lucille Johnson Lyle Area Cancer Pool Tournament, held in Carpenter, Iowa, for the past 20 years, raised $35,650 this year and $548,000 since its inception. The Harley Davidson raffle, which has been held for 19 years, has raised a cumulative total of $447,000. Together, the two events account for $1 million of the $3.1 million raised over the years, said Ricke.

That’s just two events. Crop for the Cure has raised over $100,000 since it began its venture. Quilting for A Cure raised $4,100 for one quilt; all told, it raised over $8,000 in donations.Ricke said the auction always offers up new surprises as well – like the $1,000 raised for one pie (it was auctioned off four times, after the first three bidders kept donating it back to the auction) and an Overby Orthodontics donation of $5,355 in dental work which raised $5,600.

“I always say that I never have an idea of what will be auctioned off each year,” Ricke said. One of the auctioneers, he added “said he’d never, ever, seen cemetery plots sell at auction.”

Some of the items touched hearts – one of “Tracy’s Angels” raised almost $4,000. An angel figurine has been auctioned each year in honor of Tracy Schilling, an active volunteer for the Lyle Area Cancer Auction. She died in 2004 due to cancer.

And there are always those smaller items that make up big totals, from banana bread and dollhouses, to pizzas and toys. The Kidz Kare 2 made bracelets to sell at the auction that were then donated.