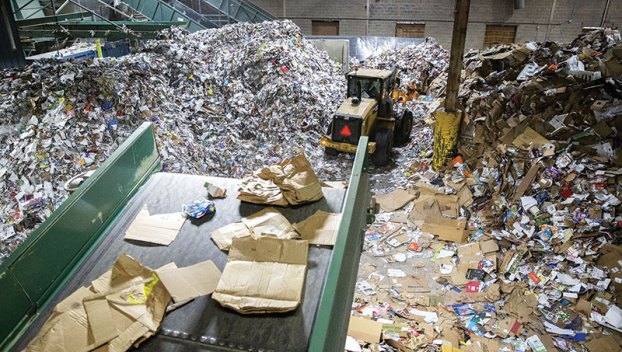 Cardboard and paper material are sorted into piles at Eureka Recycling on Dec. 25, 2019, in Minneapolis. Christine T. Nguyen | MPR News

Keep recycling: Some say financial challenges in the industry could spur innovation

Recycling programs in Minnesota and across the country have hit a rough patch, as prices for many recycled materials have plummeted.

In Minnesota, programs are getting less money for metal, plastic and paper. In some cases, they’re paying manufacturers to take glass. Twin Cities-based Eureka Recycling, for instance, says 1,200-pound cubes of aluminum cans that once sold for $2,000 now go for less than half that much.

Still, Minnesota recycling programs are faring better than those in many other states.

“It’s more challenging,” said Eureka Recycling co-president Lynn Hoffman. “But we’re in a lot better shape than most programs on the coasts.”

Industry players and officials say current challenges could ultimately prompt changes that make recycling more efficient, widespread and sustainable across the country. Meanwhile, the advice to Minnesotans is: Keep recycling. What you put in those bins is still reused.

The Eureka Recycling plant in Minneapolis plays a large role in that. It processes 400 tons of paper, plastic and metal daily. Dump trucks deposit massive jumbled piles of material. A front-end loader scoops it into a hopper that feeds a series of contraptions that use lasers, blowers, screens, magnets and other tools to sort most everything into collections. The machines — and workers — also pick off plastic bags, propane tanks, garden hoses and a myriad other items people mistakenly put in recycling cans.

Ninety-three percent of what comes into the Eureka plant goes to companies that make cardboard, bottles, cans and other stuff.

For communities like Minneapolis, the downturn in pricing means that instead of getting a check back for processed recyclables the city has to kick in more money to sustain its program.

“I think at one time we might have been bringing in $1 million a year,” said David Herberholz, director of solid waste and recycling for the city of Minneapolis.

He said the city now pays Eureka about $23,000 a month as part of a revenue and cost-sharing agreement. “That just shows you how significant the turn has been in recycling,” he said.

“The reason that we’re paying is because the total amount of revenue is not covering their operational sorting costs,” Herberholz explained.

St. Paul is also kicking in more money to sustain recycling. “Fortunately, when items were good, we put a little bit away so that we can handle when times are not so good,” said Susan Young, who oversees recycling for the city.

Young has seen a lot of highs and lows over nearly 40 years in the business. She ran Minneapolis’ recycling program for about 20 years and saw lots of price swings because of energy prices, demand shifts, recycling plant capacity and other factors.

“It absolutely has been worse in the past. Absolutely,” she said. “I remember in the late ‘70s, I was paying $25 a ton to get mills to accept my very clean newspaper.”

Nationwide about 60 midsize and smaller communities have cut their curbside recycling programs, according to Waste Dive, which closely tracks the waste and recycling industries. Others have reduced the range of materials they accept or closed drop-off sites. Some have decided to landfill or incinerate some recyclables for energy.

In Minnesota, though, communities are sticking with recycling. “We haven’t had anybody stop recycling,” said Wayne Gjerde, recycling market development coordinator for the Minnesota Pollution Control Agency.

Actually, state law mandates every county — and every community with 5,000 or more people — give residents an opportunity to recycle. That can include operating a recycling center or providing curbside pickup. Collected recyclable materials cannot be sent to landfills or incinerators, without state permission. And that permission has never been granted or even formally requested, Gjerde said.

Gjerde believes the adversity facing recycling now may make lead to changes that strengthen recycling. Those efforts include the construction or expansion of more U.S. recycling plants and the development of new uses and customers for recycled products. Recycling plants are deploying machines that better identify and separate recyclable materials. And there are initiatives to get consumers to reduce the use of plastic bags and follow recycling rules more diligently. That should mean less contamination of recycled materials. And the cleaner they are, the less costly they are to process and the greater the value of the end products.

“I think there’s opportunity, as with everything it takes time,” Gjerde said. “It’s not going to happen overnight. We’ve made some progress.”

Fever chart: Earth had its hottest decade on record in the 2010s

WASHINGTON — The decade that just ended was by far the hottest ever measured on Earth, capped off by the... read more