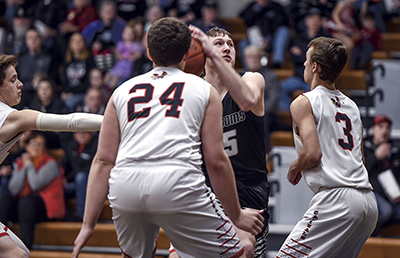 Karson Vigeland with the post move early in the first half against Faribault BA Friday night in Blooming Prairie. Eric Johnson/photodesk@austindailyherald.com

Keep on rolling: Blossoms stay on the winning track

BLOOMING PRAIRIE — Winning is the Awesome Blossoms’ business and business is good.

It’s been a little bit less than two months since Blooming Prairie won its first ever state title in football and now the BP basketball team, which has many of the same players as the football team, hasn’t missed a beat as it is off to the best start in at least a decade.

“These guys are very senior-led and they’ve been in the weight room and in the gym for years,” BP head coach Nate Piller said. “They’ve worked at it for a long time now. They’ve done the right thing and they’ve made a lot of good choices on and off the court that have helped them get in this situation. They’re physically and mentally dialed in to what they need to do.” 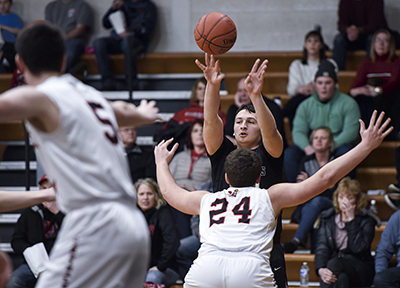 Blooming Prairie’s Gabe Hagen with the dump-off inside against Faribault BA in the first hafl Friday night in Blooming Prairie. Eric Johnson/photodesk@austindailyherald.com

The Blossoms didn’t have a whole lot of time to celebrate their state championship in football as they played their first basketball game — a 73-40 win over FBA — just six days after the Prep Bowl.

“We came out firing right away in basketball,” said Kaden Thomas, who had 17 points, six assists and two steals on Friday. “We came out in practice before the season going hard, knowing that we were two weeks behind everyone else. We had to work hard to equal everybody else.”

BP came into this season with all of its core back after it lost to Hayfield 50-48 in overtime the Section 1A Tournament last season. The Blossoms have put it on themselves to try and avoid a heartbreaking loss at the end of the season this time around.

“We brought back everybody from last year and we have a lot of team chemistry,” said Gabe Hagen, who had 17 points, 12 rebounds and three assists. “We’re working on coming out better in the second half because we’ve been coming out pretty weak after halftime. We’re also working on our presses in practice.”

BP was coming off a 57-49 win in Lyle-Pacelli on Thursday, but the Blossoms provided plenty of early energy against FBA as they scored the first 12 points and led 18-2 early on.

“You never know how kids are going to respond on back-to-back night,” Piller said. “We didn’t want to overlook anything and we wanted to play to a standard and not to an opponent. We’re looking for ways to improve, we’re not what we can be yet.” 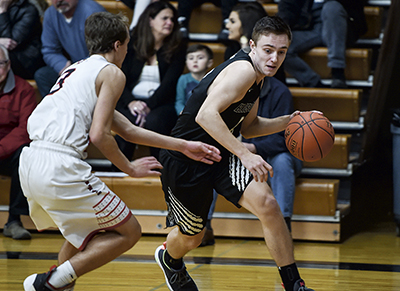 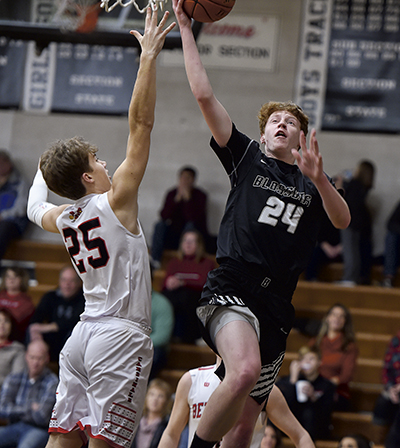 Blooming Prairie’s Kaden Thomas with a baseline lay-up in the first half against Faribault BA Friday night in Blooming Prairie. Eric Johnson/photodesk@austindailyherald.com