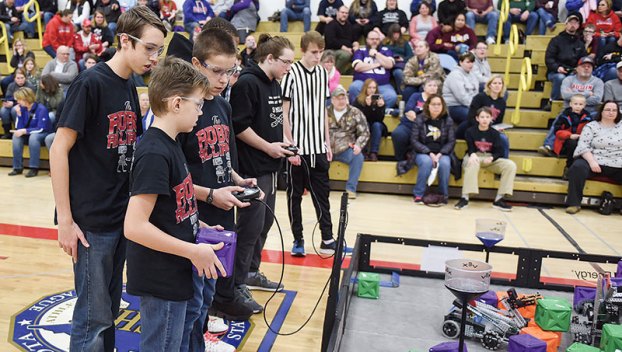 Helping hands: As VEX competition grows, some teams are getting help from their competitors

Sometimes, you just need a little help from your friends.

That’s what the Robot Alliance team found out this past Saturday when they received a helping hand from the IJ Holton Intermediate School VEX teams at the fifth annual VEX Robotics Competition at Austin High School.

The Robot Alliance is a team of home-schooled students from Brownsdale and Austin and in the process of competing in their first ever competition, found themselves behind the eight ball.

While preparing earlier this week, the team, consisting of Abe Phillips, Marcus Mielke and brothers Micah and Cavah Parks, found themselves in a bind when their USB port broke. 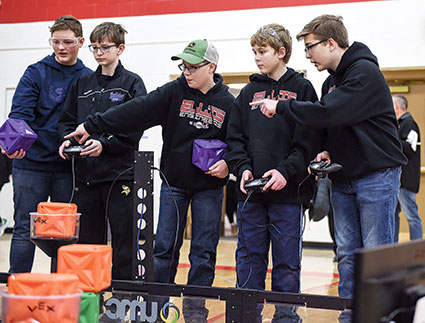 This instantly became a problem, because without the port they couldn’t upload their code to the robot.

“The USB port broke on Wednesday and they needed it for uploading the code,” said team coach and Abe’s mom Nikki Phillips. “We went around looking for somebody to help fix it, but nobody would touch it.”

So, on the day of the competition, Nikki went around to various teams hoping they had some spare parts they could use. Like in the “Wizard of Oz,” the team needed a brain for their scarecrow, and they needed it fast.

In stepped the IJ teams. 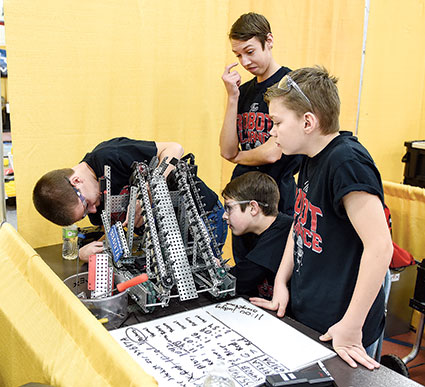 “I ran into Nikki as she was asking teams if they had spares,” said IJ coach/ teacher and event partner Kaylene Jensen. “Not all the teams have extra equipment. After overhearing her conversation, we gave them the spare equipment to make sure they could compete.”

With part in hand, the Robot Alliance worked quickly to get the “brain” connected to their robot and not long after were out on the floor with the rest of the  competitors.

It’s another step for a team that in many ways is still finding its path during the first year of competition, especially when the foursome doesn’t have a school behind them to help with supplies.

That’s where the town of Brownsdale has really stepped up. 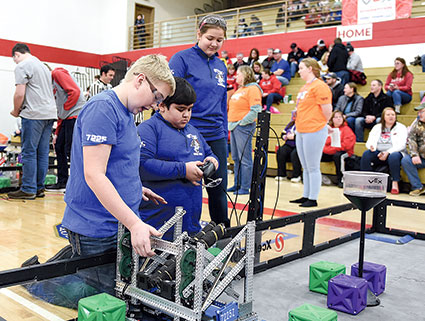 Members of the Southland Rebel Bots Riley Walerak, from left, Denecio Carillo-Olson and Alana Wilde prepare their bot for competition Saturday during the VEX Robotics Competition at Austin High School.

“We went around to our local businesses in Browndale,” Nikki said. “Akkerman gave us a ton of stuff and we got help from IBI Data as well.

Watching the team step up to this kind of adversity in its first year has been fun to watch, Nikki said, admitting that she does very little in terms of the robots. 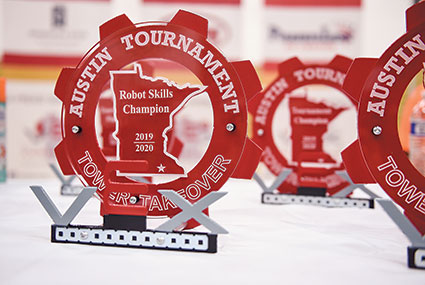 Hardware was on the line Saturday during the VEX Robotics Competition at Austin High School.

For Jensen, helping out the Robot Alliance in a time of need didn’t take a second thought. While the ultimate goal is for teams to compete and bring home the hardware, a larger driving force of the competition is making sure that all the students that come to the competition get the opportunity to compete and participate.

“We make sure they can compete,” Jensen said. “We support everybody and we want to make sure everybody has a great day.”

“Last year, we had a team that was a brand new team and they didn’t understand how their coding worked so we had a student sit down and help them,” Jensen added.

This year, 73 teams took part in the day-long competition and Jensen is finding that after five years the event gets stronger and stronger. 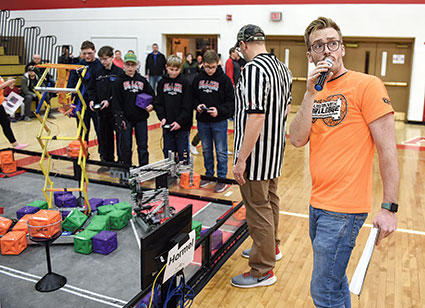 Announcer Lars Johnson looks back at the time during a match Saturday at the VEX Robotics Competition at Austin High School.

“Every year we feel we get better at offering opportunities and different levels of experience,” Jensen said. “This year we honored parents. Honoring them because this is an activity that they contribute so much to.”

This year, they took one more step by offering snack bags to teams to make sure teams are getting food throughout the day, combating a trend where some students in the past would come, but had no money to be able to buy something to eat.

All in all, it’s these things that are making this now annual event something to look forward to.

“I think it’s amazing,” Jensen said. “There is so much work, we wouldn’t do it if it wasn’t worth it. It’s so nice for these kids to be able to showcase what they are doing throughout the year.” 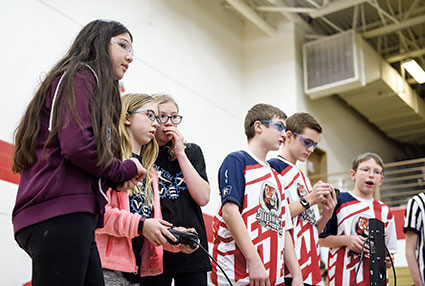 Packers are aiming for history: Austin has sights set on pool records for Section 1A True Team Meet

The Packer boys swimming and diving team is hoping to create some big waves as they face their annual midterm... read more