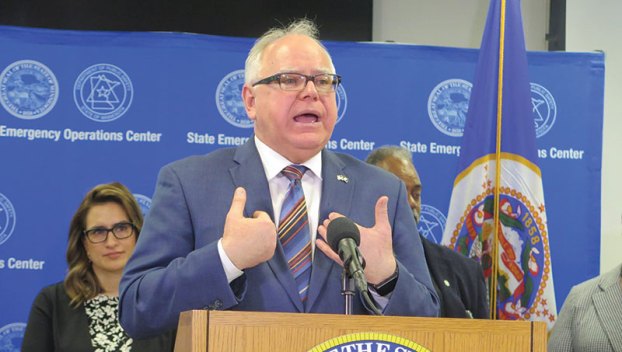 Gov. Tim Walz announces the fourth and final installment of a bonding proposal that totals $2.028 billion during a meeting with reporters at the state’s Emergency Operations Center on Jan. 15, 2020. Tim Pugmire/MPR News

DFL Gov. Tim Walz on Wednesday rolled out the final part of his plan to borrow more than $2 billion for public construction projects. A bonding measure is expected to get a lot of attention from state lawmakers when the 2020 legislative session begins on Feb. 11, but Republicans who control the state Senate say the governor’s list of projects is too expensive.

The total plan is made up of projects Minnesota communities are asking for, Walz said.

“The needs are real. Interest rates are low. There’s no reason not to act. We’ve had the privilege of going everywhere from East Grand Forks to Duluth to Minneapolis to Marshall, and we’ve seen it firsthand,” he said.

The governor’s latest list of bonding projects includes security upgrades at the state Capitol, remodeling of the Minnesota Sex Offender program in St. Peter and upgrades to the Minnesota Zoo.

“This proposal goes a long way, partnering with local government, to make sure that those roads and bridges are safe and secure,” said transportation commissioner Margaret Anderson Kelliher, adding that local officials have not been able to keep up on their own.

Walz made the bonding announcement at the state Emergency Operation Center in the downtown St. Paul offices of the Department of Public Safety. His plan would provide more than $29 million to replace and relocate the facility.

Public safety commissioner John Harrington said the facility is inadequate to respond to disasters and emergencies.

“This is not an ‘if it’s going to happen.’ It’s a ‘when it happens,’ and it’s happening with greater and greater frequency. Without a working and available EOC the state is scrambling, losing precious time in that process,” Harrington said.

Bonding bills are considered the main task of even-year legislative sessions. A 60 percent supermajority is needed in both the House and Senate to pass them.

Republicans have been critical of the size of the Walz bonding plan.

Senate Majority Leader Paul Gazelka said this week that he wants to pass a bonding bill this year that focuses on big projects. He wants roads, bridges and water infrastructure in the bill. But Gazelka said he wants to stay under $1 billion.

“I think it should be closer to the numbers that we had before. The last two were $825 million and $988 million. That’s the last two. The closer it is to that number, the more support I have for it.”

But the governor, as well as Minnesota management and budget commissioner Myron Frans, insisted that the state has more than sufficient financial capacity to take on the proposed $2 billion in borrowing.

“I hope the Legislature does their work. Hold hearings. Bring in the mayors. Talk to people about what these are,” he said. “Don’t come with an ideological rigid place that does not match up with the facts, that does not hold up with the math and is not the place where Minnesotans and their elected leaders are at.”