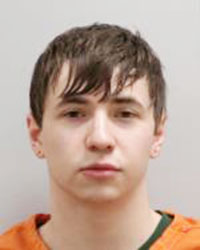 According to the court complaint, Austin police received a call at about 12:44 p.m. on Dec. 30 regarding two people who were unresponsive or sleeping in a vehicle parked at a residence in the 1500 block of Sixth Street Southeast. An officer arrived and observed a dark colored Dodge Avenger parked in a driveway at the residence. Two subjects were moving around in the vehicle.

The officer observed movement on the passenger side and ordered the individual in the passenger seat to open the door. After a period of time with no response, another officer parked directly behind the vehicle and gave a PA announcement for the driver to exit the vehicle. Eventually the passenger door was opened and the passenger, later identified as Haugen, was walked to a squad car.

The individual on the driver side, identified as Drew Michael Rosenthal, 22, of Austin was also removed from the vehicle.

A review of Haugen’s criminal record shows prior convictions for theft and possession of drug paraphernalia.

Haugen’s next court appearance has been scheduled for June 12.

Rosenthal has also been charged with felony third-degree drugs – possess methamphetamine in a school zone. He will have an initial court appearance for that charge on Jan. 23.