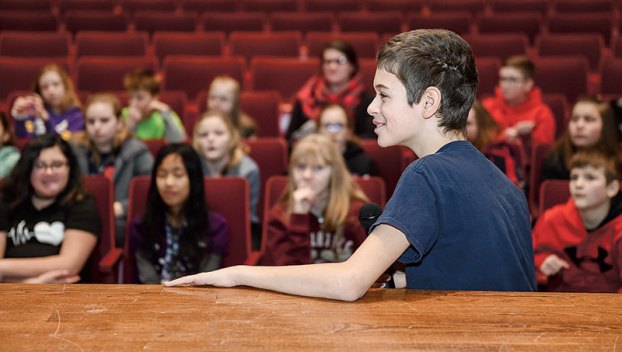 Aiden Falcon listens to a question during his presentation on his having spina bifida Tuesday at Ellis Middle School. Eric Johnson/photodesk@austindailyherald.com

Members of the IJ Holton Peer Power Partners program at Ellis Middle School in Austin attended a presentation Tuesday, but instead of a teacher or community member, it was one of their fellow students educating them.

When Aiden Falcon was born, doctors found out he had Myelomeningocele Spina Bifida, a condition where the spinal cavity is open at places and the nerves and membranes grow out, forming a sack on the baby’s back.

From the time he was a few months old, he has had five surgeries, the first kept him in the hospital for his first Christmas, while others led to him spending a Thanksgiving and New Year’s Day in care as well.

Having a newborn son in the hospital was tough for Falcon’s mom, Kay Sorensen.

“Who wants to have their first Christmas with their little baby in the hospital?” she said. 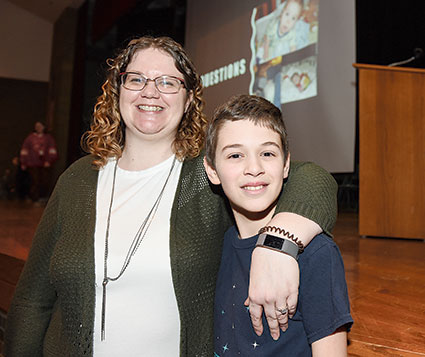 Aiden Falcon and his mom Kay Sorensen gave an informational presentation Tuesday at Ellis Middle School on spina bifida, which Aiden was born with.

While some of Falcon’s hospital stays were to work on his spine, others dealt with the issues that come with his condition.

Because of his spina bifida, cuts on Falcon’s feet take a long time to heal, which means he is very susceptible to infection. Because of this, one of the things he and his family have to do is keep an eye out for any injuries to his feet.

Because he cannot control his right foot, he wears a brace on it.

Although his condition means that he cannot run as fast or as long as his peers, he is still staying active. While he cannot perform some of the kicks, his punches have led to him being a gold belt in karate.

“It has really helped,” Sorensen said. “He can be physically active and do something.” 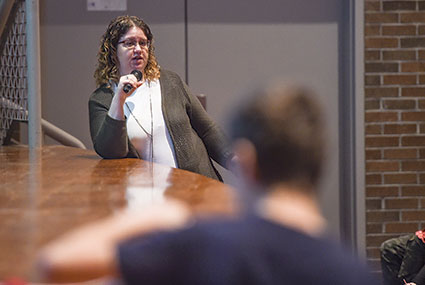 Kay Sorensen talks about her perspective on her son Aiden Falcon’s spina bifida.

The main lesson Falcon wanted his fellow students to know is that just because someone is different does not mean they should be treated differently.

“Everyone’s different in a way,” he said.

When one of the attendees asked if he would take a cure for his condition if one is ever invented, Falcon said on the one hand he would, while on the other he was not sure.

In cases like his, the differences are just easier to see, he said. 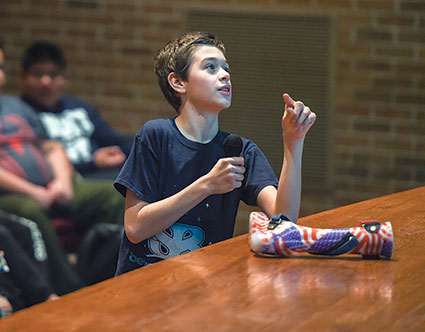 Aiden Falcon reads off a slide during a presentation on spinal bifida at Ellis Middle School Tuesday.

More and more studies are being done on the condition, Sorensen said, with doctors developing some procedures to help treat it while the baby is still in gestation.

In the procedure, a baby would be partially removed from the mother via a C-section at 20 weeks and doctors would perform surgery on the back before placing the child back in the mother to finish developing.

For Falcon, there will be a number of surgeries in the future to continue to deal with his spina bifida.

After the presentations, both Falcon and Sorensen said the event went very well.

The Peer Power Partners program connects special education students with those in general education to work on academic and social skills.

A California man was arrested on Sunday after allegedly attacking the driver of a vehicle in which he was a... read more