Dorothy Fay Bornfleth, 99, of Austin, Minnesota, passed away at Good Samaritan-Comforcare in Austin on Tuesday, Dec. 31, 2019. 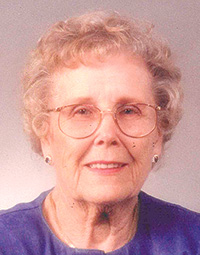 Dorothy Fay Youngdahl was born March 15, 1920, to Gunard and May (Messenger) Youngdahl in Lake City, Iowa. Dorothy was two when the family moved to Austin as Gunard found employment with the George A. Hormel Company. Dorothy graduated from Austin High School in 1938 and married Allen Bornfleth on Jan. 14, 1939, in the parsonage of the Methodist Church. Allen passed away on Oct. 17, 2015. The couple was married for 76 years.

Dorothy and Allen loved traveling and had lots of adventures with their travel trailer. They found a winter home in Mission, Texas and made many new friends. Dorothy loved all craft projects and also ballroom dancing, a hobby they took up after retirement.

Dorothy was employed at Sterling Drug for many years in the cosmetic department. As a member of First Methodist Church from the age of two, her church home was very important to her. She was a member of the Ladies Aid and Couples Club.

She was preceded in death by her parents and husband, Allen.

Funeral services will be held at 11 a.m. on Thursday, Jan. 9, at First United Methodist Church with the Rev. Dr. Donna Dempewolf officiating. Interment will be in Oakwood Cemetery. Visitation will be held Thursday morning one hour before the service at the church. Clasen-Jordan Mortuary is handling funeral arrangements.