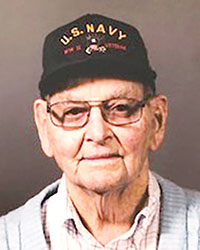 Donald Ellis Larson was born on May 8, 1926, to Hogan and Mabel (Viste) Larson. He attended school in Adams and Elkton, Minnesota, and graduated from Rose Creek High School in 1944.  After graduation, Don joined the U.S. Navy in the fall of 1944. He was stationed in California during his two-year tour.

Following his honorable discharge from the Navy in October of 1946, Don visited a friend in Kansas. It was there he met the love of his life, Norma Van Meter. They were married April 6, 1947. Don worked for Western Electric until 1950, when he and Norma moved to Minnesota to farm. He farmed in Mower County for 37 years and worked part-time for ASC for 40 years.  Don was on the Board of the Stacyville Co-op for 13 years and was on the FMHA Committee for four years. He was a member of Little Cedar Lutheran Church, where he served as a deacon and was on the church council. Don was a proud member of Adams American Legion Post 146 and served as post commander in 1955. One of his happiest experiences was to be a part of an Honor Flight to Washington, D.C. in 2008. He was always a sports fan and attended many of the Southland sporting events.