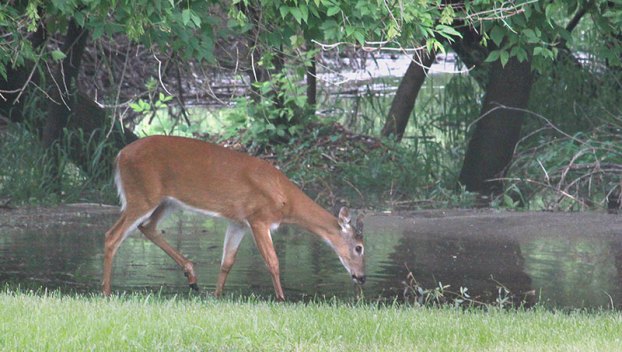 Nearly 30 deer were discovered to have chronic wasting disease during this past hunting season. Herald file photo

During the 2019 hunting season and special hunts, chronic wasting disease (CWD) was confirmed in 27 wild deer, all from southeastern Minnesota.

CWD was not detected in wild deer in central and north-central Minnesota.

“Overall, this is good news for Minnesota’s wild deer,” said Lou Cornicelli, DNR wildlife research manager. “The disease is still relatively rare across the state, and the CWD-positive test results this year came from areas where we had the most risk.”

An additional 282 opportunistic samples (deer found dead or reported sick) were tested, with one CWD-positive found within the southeast disease management zone.

Researchers are still submitting some samples from cooperating taxidermists. Final results will be updated online at mndnr.gov/cwdcheck as they become available.

In southeastern Minnesota, 23 additional cases of CWD were discovered in the disease management zone during the fall hunting season. Three additional deer were found positive for CWD after testing from the two special hunts in this area. The southeast control zone, a buffer area around the management zone, returned no CWD-positive results.

This was the third year of sampling in the north-central area, after the discovery of CWD in a deer farm in Crow Wing County. More than 8,000 wild deer were tested during falls 2017 and 2018 without any detection of CWD; however, one CWD-positive deer was found dead near the infected farm in January 2019, which sparked more aggressive control strategies.

The management zone, deer permit area 604, will remain in place for at least two more years to see if CWD is found in other wild deer in the area.

“We’ll continue watching the north-central area to see if disease is present beyond the one CWD-positive deer discovered last year,” Cornicelli said.

Because no wild deer were found to be positive with CWD in the central surveillance area in its third consecutive year of testing, there will be no more testing in this area during the 2020 hunting season. Precautionary testing in central Minnesota began in 2017 after the discovery of CWD at a deer farm in Meeker County.

To support hunter compliance with CWD management carcass movement restrictions, the DNR placed dumpsters for deer carcass collection and disposal in 25 locations across the disease management zones as part of the Adopt-a-Dumpster program. The program kept more than 200 tons of deer remains off of the landscape, reducing the potential for spread of CWD through infected carcasses.

“The support and help from hunters, stakeholders, and businesses were critical in making this effort a success,” said Bryan Lueth, DNR habitat program manager, who helped coordinate the program.

Backcountry Hunters and Anglers, Bluffland Whitetails Association, Crow Wing County and the Minnesota Deer Hunters Association provided support for the DNR’s Adopt-A-Dumpster program, which was established by the Minnesota Legislature.

In February, the DNR will work with U.S. Department of Agriculture-Wildlife Services to complete targeted culling in localized areas in the southeast where CWD has been detected in wild deer. Reducing deer densities in these areas reduces the risk of disease spreading. A map of the areas of focus is available on the southeast disease management zone webpage at www.dnr.state.mn.us/cwd/se-management-zone.html?utm_medium=email&utm_source=govdelivery.

Venison from deer harvested that do not test positive for CWD will be donated through the Share the Harvest program. People can find more information about the program at https://www.dnr.state.mn.us/cwd/share-harvest.html?utm_medium=email&utm_source=govdelivery.

Final CWD test results will influence how the DNR manages the disease going forward and any changes it will make to 2020 hunting regulations, which will be released in August.

CWD is an always-fatal neurological disease that affects the cervid family, which includes deer, elk and moose. Since CWD was first detected in a captive elk in Minnesota in 2002, the DNR has tested more than 90,000 wild deer in the state. To date, 79 wild deer have been confirmed positive for CWD in Minnesota. Test results, including locations of confirmed positive test results and statistics, are available on the DNR website at mndnr.gov/cwdcheck.

Keeping Minnesota’s wild deer population healthy remains the goal in the DNR’s response to chronic wasting disease. The DNR’s three-pronged approach to prevent spread of the disease was detailed in an earlier news release; the department’s CWD response plan can be found at www.dnr.state.mn.us/cwd/cwd-response-plan.html?utm_medium=email&utm_source=govdelivery.

The fourth annual Community Connect will be held from 11 a.m. to 2 p.m. on Friday at Riverland Community College,... read more