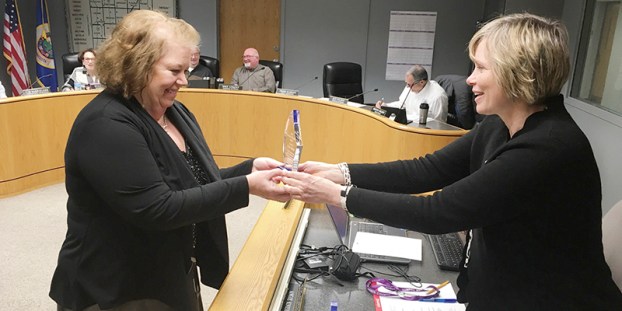 With the Board not having power to actually stop refugees from moving to Mower County, Tuesday’s question was more about whether or not to allow agencies like Catholic Charities to provide funding to get people settled here.

“There is no mechanism that can keep any refugee from moving to Mower County should they choose to come here,” County Administrator Trish Harren said.

Refusing to consent would mean if refugees move here, there would be no aid from agencies for them, which would mean a greater cost to the county, she said.

Due to a decision by President Donald Trump in September, states and counties may choose whether or not to have agencies resettle refugees in a state or locality.

Over the last several years, 65 refugees have been resettled in the county.

The county has a public health nurse work with refugees to help them coordinate with local healthcare providers and make sure they are getting their health screenings.

Catholic Charities, which administers funding for refugee resettlement in the area and helps them find jobs, housing and other resources, sent a letter to the county asking the Board to give its consent.

“It really helps sponsor them for their first 90 to 100 days and get them placed into a community,” Health and Human Services Director Lisa Kocer said.

Many of the refugees that are here have family looking to join them, she said.

The executive order does not apply to spouses or children being resettled in the same place as their family member.

The refugees are probably the most vetted immigrants coming into the country, Harren said.

In the case of Mower County, many have been recruited to work at businesses, she said.

With the current shortage of workers, refugees are needed by larger businesses, Harren said.

“Our largest employers rely on refugees to help fill those gaps,” she said.

During the meeting refugees, including Oballa Oballa from Ethiopia who recently became a United States citizen, asked the Board to consent to having people resettled in the county.

He said he is proud to be a United States citizen and hopes his family and friends still in refugee camps in Kenya are inspired to come to America and follow his example.

The Board unanimously approved consenting to having refugees resettle in Mower County.

During the meeting, the Board also set salaries for employees and elected officials in the county.

It approved giving non-union employees the same 2.5 percent increase in wages in 2020 as union employees, along with the same contributions to health insurance.

After reviewing what work is done and the pay of officials in other counties, The Board approved on 4-1 votes:

Commissioner Jeff Baldus voted against all four measures because while he felt the salaries should be increased, the proposed raises were too high.

The Board then voted 4-1 to keep its salary at $24,200. This has been the commissioners’ salary since 2008 and Tim Gabrielson voted against the measure because the work commissioners do has increased since then.

Commissioner Jerry Reinartz said the amount is comparable with other counties with similar populations as Mower County.

The Board kept its per diems for in county, non-county board meetings at $50, increased the out of county per diem from $65 to $75 and created a $150 per diem for meetings which require overnight travel.

Due to the travel distance required, the Board set the per meeting per diems for the representatives on Minnesota Rural Counties and the Rural Minnesota Energy Board at $150.

For other boards, the per diems remain $50 unless there are two meetings in a day, in which case the member would receive $75. 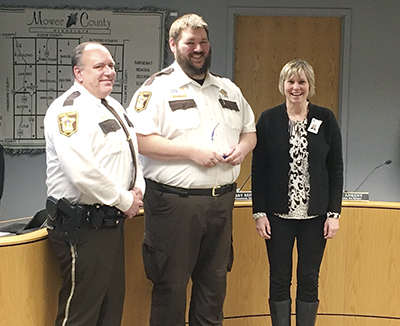 Among the employees recognized for saving the county money was Jail Administrator James Brown, whose changes at the jail saved more than $500,000. Pictured are (from left): Sheriff Steve Sandvik, Brown and Mower County Administrator Trish Harren. Tyler Jensen/tyler.jensen@afustindailyherald.com

Also during the meeting, the Board recognized employees who have done work that has saved the county money.

The county’s insurance committee was awarded the Innovation and Excellence Awards for freezing the county’s cost for insurance premiums by recommending increasing the number of days to qualify for short term disability from three to four.

Jail Administrator James Brown was recognized for implementing changes like not replacing one visitation system and instead going with a less expensive alternative, putting the jail’s food service out for bid, implementing a texting option for inmates where they pay the jail to text on issued devices and reducing the amount of fighting, which has saved the county more than $500,000.

Senior Accountant Cindy Jensen’s work in recouping sales tax dollars from the state that should have gone to the county was also recognized.This brought more than $178,000 back to the county.

Finally, Finance Manager Donna Welsh was honored for recommending the Board use cash reserves to pay off the remainder of its $16 million jail bond, which saved the county $444,800 in interest due to rates increasing from 1.25 percent to more than 5 percent, along with proposing other ways to save money or fund projects not originally budgeted for.

The next meeting of the Mower County Board of Commissioners is Tuesday, Jan. 7, at 1 p.m.

Cardiorespiratory exercise — walking briskly, running, biking and just about any other exercise that gets your heart pumping — is... read more