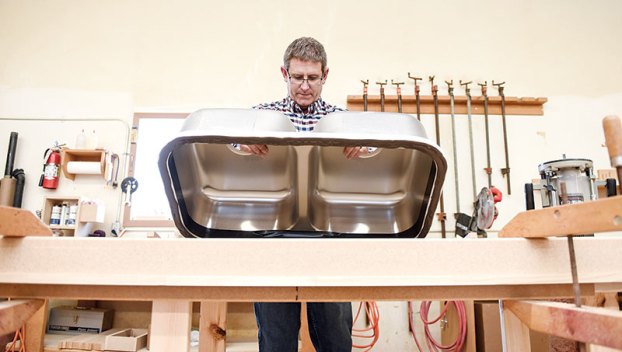 Mike Newman lines up a sink before afixing it to a countertop at Howe’s Countertop Connections in Dexter. Photos by Eric Johnson/photodesk@austindailyherald.com

Howe Countertops in Dexter has a new owner, after longtime employee, Mike Newman purchased the business.

Newman has worked for company founder Bob Howe since 1998. He is changing the name to Howe’s Countertop Connections to add his own stamp on the business while still connecting it to Howe, who started the company in 1983.

Newman said Howe helped him get where he is today and made the process of taking over the business very accessible.

His interest in the field came from his dad, who was in construction when Newman was a child.

After time in the military, Newman went to carpentry school and worked as a cabinet maker for five years, before going into the counter business.

With that experience comes a lot of knowledge about the business, he said.

“I’ve basically seen everything and anything that can happen,” Newman said. 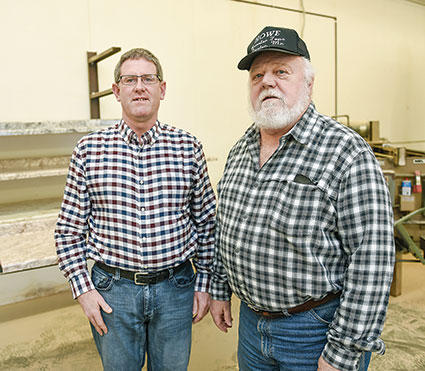 Mike Newman stands next to Bob Howe at Howe’s Countertop Connections in Dexter. Newman recently bought the business
from Howe.

The company does a lot with laminate surfaces, but does not work with quartz or granite due to the specialized equipment and skill needed to work with those materials, Newman said.

Still, he plans on expanding the company’s offerings to include cultured marble, butcher blocks and even stainless steel, which will be fabricated by distributors and delivered to Newman who then installs the countertop.

“There’s no one around here that really offers that,” Newman said.

When Newman works with a client, he’ll come to their home to measure the space and talk about what options they have.

“We are a little more expensive than the big box stores, but you pay for our expertise,” he said.

It is very rare that the company makes a mistake and if there is one, it will be taken care of, Newman said.

Knowing what the customer plans to use the counters for allows him to recommend different types of material that may be more durable, different looking and so on. 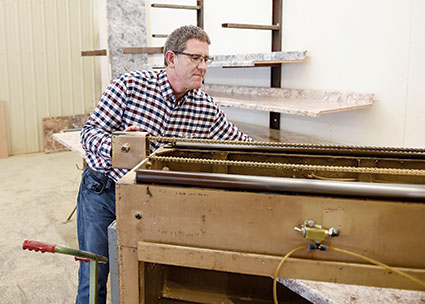 Mike Newman lines up a saw to cut a countertop at Howe’s Countertop Connections in Dexter.

Ultimately though, the decision is up to the customer as they are the person who has to live with it, Newman said.

Currently, remodels are a bigger portion of the company’s work than new construction, Newman said.

While the entire process of ordering and fabricating countertops takes a few weeks, installation generally only takes one day for Newman and the team at Howe’s to install the counters.

This is one of the things Newman prefers about counters over cabinets.

Over the years, the industry and people’s tastes have changed, he said. 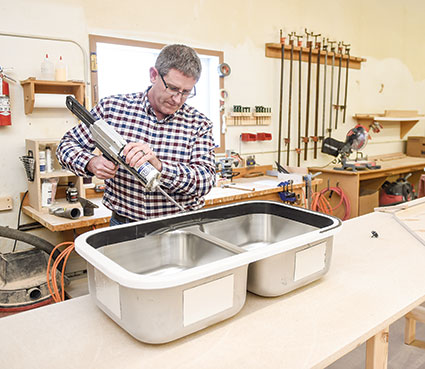 Mike Newman applies glue to a sink before afixing it to a countertop at Howe’s Countertop Connections in Dexter.

One area the industry did not immediately recognize as a big deal was granite.

The material is one of the most durable options, but also the most expensive, Newman said.

Now, laminates are made to look just like granite and there are brands that look like granite, while being less expensive.

This allows customers to change out countertops more regularly than granite, which is a once in a lifetime project, Newman said.

The company has one client, for example,  who changes her counters every few years to keep up with design trends.

Another change has been the popularity of programs like HGTV, a double-edged sword. While it can encourage people to have work done, it can also mislead people on what they can do themselves and how much projects can cost, Newman said.

Many of the shows are filmed down south, where labor and materials are cheaper. The programs can also make projects look easier than they are. 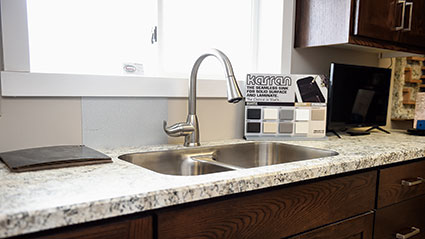 A counter top display shows off what is available Howe’s Countertop Connections.

“They make it look so easy on TV and then some people go, ‘Well I can do that myself,’ and they get into a big mess,” Newman said.

In many cases, people come to the professionals once they begin planning and seeing all the costs and work that is needed, he said. This is preferable to someone getting halfway through the project and then deciding to call the experts.

“It’s much easier for me to get as close to the starting line as possible,” Newman said.

A number of different groups including the Minnesota Pollution Control Agency are looking into an incident earlier this week surrounding... read more