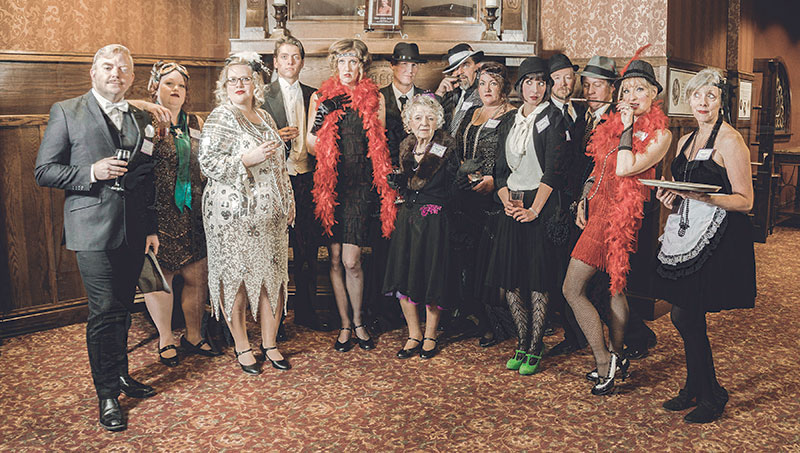 The players involved in last years murder mystery fundraiser were a major part of what the event a success. Photo provided

It’s Mardi Gras. A time for celebration in the Big Easy, that is until a dead body shows up.

That’s the case to be solved at this year’s murder mystery, a fundraiser put on by Friends of the Library at the Hormel Historic Home on Feb. 1.

It’s the follow-up year to a successful first year that took participants to the 1920s, placing them smack dab in the middle of a turf war.

“It was about two opposing rival gang members that were coming together to have a conversation about how they can work together,” said Elizabeth Carlton, president of Friends of the Library. “Then somebody killed another person in the other gang.”

The idea to host the mystery fundraiser didn’t have any specific origin, according to Carlton. Instead, it was just something that came to her.

“I just thought of it as an idea,” Carlton said. “It was an idea that I brought to the board. Some of the board members were really excited because some of them come from a theater background.”

The first year bring a success, the Friends decided to bring it back, this time focusing on Mardi Gras.

This year’s story will bring people together at a governor’s ball, to support the various things he has going on in the city. The ball will bring in people from all over,  many of whom have grudges against each other, Carlton explains.

When somebody at the ball turns up dead, the mystery takes over.

Those attending will be given a clue sheet of everybody’s names and other details to keep track of what people are saying throughout the evening. After the prologue, when the dastardly deed is discovered, visitors will get the chance to interview suspects.

As the night progresses, people start comparing notes as they get closer to figuring out whodunnit.

The case itself is taken from a kit you can get from the internet.

“There are a fair number of murder mystery things online,” Carlton said. “There are kits you can buy and then we adapt it. It works for our setting.”

The question is getting it adapted to not only their situation, but to a situation that have so many people participating at the same time.

It’s a challenge that Carlton wasn’t sure would work the first year, but what helped it succeed were the actors that dove in and helped guide the night.

“The actors did a really excellent job paying attention,” Carlton said. “The actors are constantly moving to talk to everyone.”

Adding to the excitement of the night is the willingness of people to come in full costumes. It adds to the entire ambiance of the event.

“Everybody really threw themselves into it,” Carlton said. “They came in costume and that was really cool because it added a whole new level to it. I’m really hoping we’ll repeat this year.”

And even if they don’t make it to this year’s event, those people on the waiting list could play into a bigger event next year as the Friends of the Library are considering adding a second night if there is enough interest.

“It would gauge interest to see if we can accommodate people if they are truly interested in it,” Carlton said.

This year’s event will take place at 6:30 p.m. on Feb. 1 at the HHH. If you would like to be put on the waiting list, send an email to austinfriendslibrary@gmail.com. Tickets cost $25.

Hormel Historic Home: Lift the veil on the Wedding…