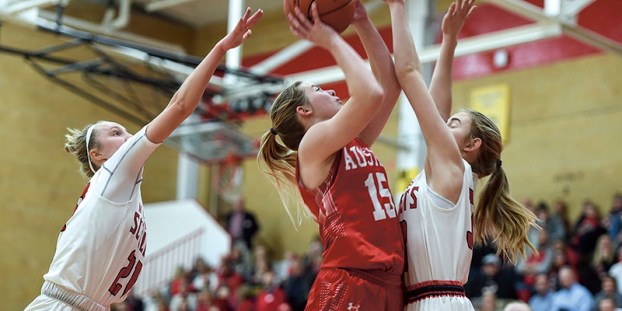 Austin’s Erica Lundberg with the strog work underneath during the first half against Mankato West Friday night in Ove Berven Gym. Eric Johnson/photodesk@austindailyherald.com

Breaking it Open: Packer impress on Hall of Fame night

The Austin girls basketball team played one of its best games in front of the best player in program history as it beat Mankato West 61-41 on Hall of Fame night in Ove Berven Gym Friday.

The Packers opened the second half on a 14-5 run that put them up 44-27 with nine minutes left in the contest as they rolled past the Scarlets (12-6 overall, 10-4 Big Nine). Lisa (Bue) Krumwiede, who is Austin’s all-time leading scorer with 1,592 points, was in the crowd as she was inducted into the Hall of Fame at halftime.

While today’s Packers are too young to have watched Bue play. They certainly know of what she did for basketball in Austin. 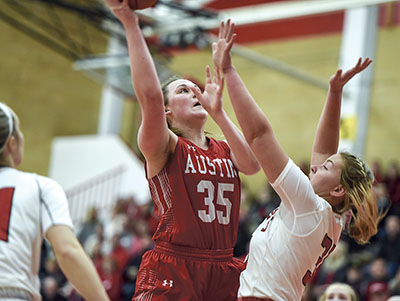 Kyra Walters with the eye on the basket against Mankato West in the first half Friday night in Ove Berven Gym. Eric Johnson/photodesk@austindailyherald.com

“I’ve heard her name a lot,” said Austin senior Colie Justice, who had 20 points and five rebounds in the win. “I know she’s super successful and she means a lot to the school. It was super cool to have a great crowd for a big game. We don’t play many big games throughout the year.”

The Packers have now held five of their last six opponents to less than 48 points as the team has clamped down on defense. Austin won its first meeting over West by a score of 78-71 on Dec. 12.

“Defense fuels everything for us,” said Elyse Hebrink, who had two points, nine rebounds and four assists. “It leads to transition and it leads to shots being made. When we play strong defense, we play our best.” 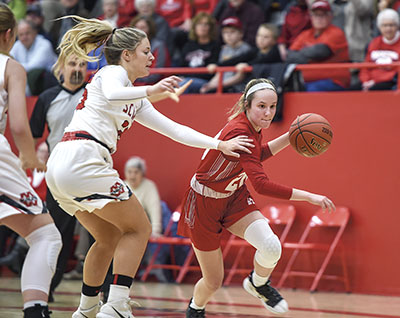 The Packers (17-4 overall, 14-3 Big Nine) falter in the second half after building up a double digit lead. Austin head coach Eric Zoske said the total effort was a good sign for a team that has just three weeks left in the regular season.

“We’ve had glimpses this year of playing really good halves, but then we’ve struggled,” Zoske said. “This is probably the most complete game that we’ve had in recent memory. It starts with our defense and when we play defense like that we’re tough to beat, especially with a packed crowd in Ove Berven Gym.”

Austin has five conference games remaining and it trails Red Wing by a game in the Big Nine standings. The Packers may have to win out if they want to capture their first conference title since 2004. 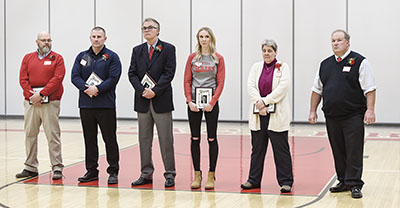