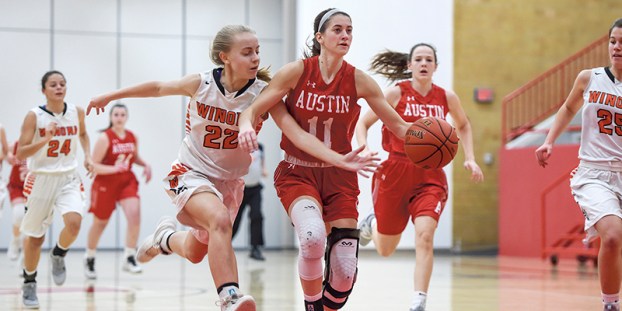 Austin’s Colie Justice tries to fend off Winona’s Izzy Goettelman on the way to the hoop during the first half Thursday night in Ove Berven Gym. Eric Johnson/photodesk@austindailyherald.com

Bouncing back: Packer girls break the 100-point mark in win over Winona

The Austin girls basketball team needed a positive in the worst way and they answered the bell with their biggest scoring output in at least a decade when they beat Winona (1-16 overall, 1-12 Big Nine) 102-40 in Ove Berven Gym Thursday.

Austin (15-3 overall, 12-2 Big Nine) had lost two of its last five games and the three wins were all by eight points or less.

The Packers started a little bit slow on Thursday as well as they led just 35-23 late in the first half. That’s when the Packers picked up the pace and put together a 26-3 scoring burst that lasted into the second half.

“When you start struggling on offense it’s not really the offense that gets you going, it’s your defense. Our goal is to hold each team we play to below 20 points in each half and when we do that, we seem to score a lot more points,” Austin head coach Eric Zoske said. “We’ve been emphasizing defense and we needed to have a slump buster. Time will tell if this is it, but that second half sure was a good sign of maybe getting out of that slump.”

Hope Dudycha scored 21 points and she also chipped in four steals and five assists in limited minutes for the Packers, who have eight key conference games remaining over the next month as they continue to chase after the Big Nine title. Austin was tied with Red Wing for first place heading into Thursday.

“It just seems like we haven’t been playing like ourselves (lately),” Dudycha said. “We came out in the second half and we brought the energy to play like we know how to. With just a few games left, now is probably when we want to play our best.” 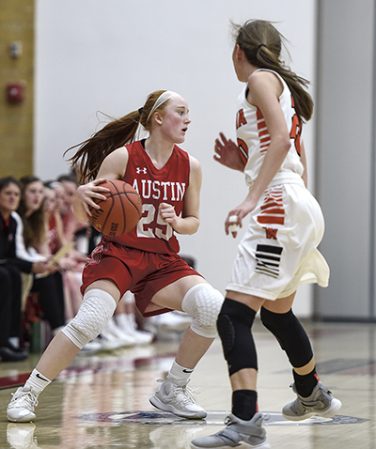 Austin’s Cassidy Schute controls the ball during the first half against Winona Thursday night in Ove Berven Gym. Eric Johnson/photodesk@austindailyherald.com

Erica Lundberg made her first start of the season for the Packers as she finished with 17 points and five rebounds.

“I just went in confident and I tried not to be nervous,” Lundberg said. “It was awesome (to score 100).  It was something that we wanted last year, but we never got it. We were finally able to do it.”

Colie Justice had 15 points for Austin and Reana Schmitt had 12 points off the bench.

“Tonight was a lot of fun,” Zoske said. “Every girl that played scored and we had six girls in double figures. It was a great job by Erica tonight. She’s an easy kid to cheer for and when she has a big night, I think that makes everybody happy.” 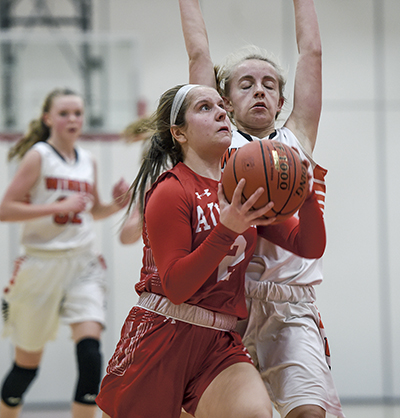 Austin’s Hope Dudycha goes in for a lay-up during the first half against Winona Thursday night in Ove Berven Gym. Eric Johnson/photodesk@austindailyherald.com 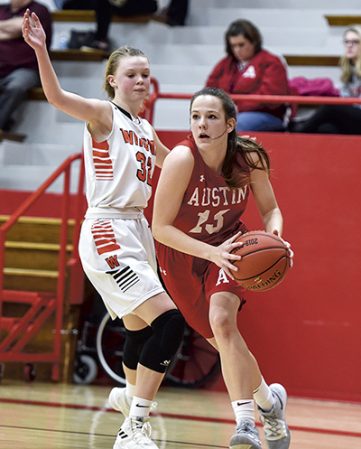 The Riverland Community College women’s basketball team put up a good first half fight, but ended up losing its ninth... read more