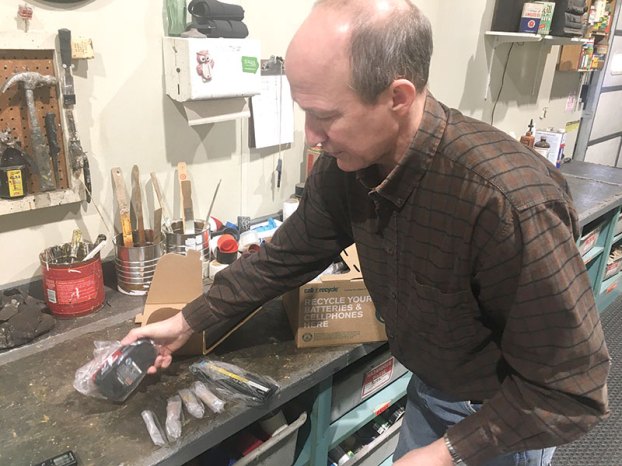 Jeff Weaver with Mower County’s Recycling and Hazardous Waste program goes through a box of rechargeable batteries that have been collected at the site. Tyler Jensen/tyler.jensen@austindailyherald.com

If a lithium ion battery is broken and exposed to air, it could cause a fire that can be more difficult to put out than a normal one.

The batteries are used in everything from cellphones to cordless drills and more.

Because of the equipment involved in dealing with trash, trucks with compactors, forklifts and more, putting those batteries in the trash can be a recipe for disaster, said Jeff Weaver, who oversees Mower County’s Recycling and Hazardous Household Waste program.

In the past, retailers in the county would have collection sites for rechargeable batteries that used materials like nickel cadmium or the lithium ion batteries. Now, there are no such sites in the county.

If there were other places in the county to take these batteries, Weaver said he wouldn’t have them as part of the program at the Recycling Center.

“I try to avoid, as the government, to be the first choice to take stuff. If there’s a private company that takes them I say, ‘Hey, take them there,’” he said.

In this case, there are no places to take the batteries, which can be dangerous if disposed of improperly.

“The lithium ion batteries are a lot more of a problem because as soon as they are exposed to air, it starts on fire,” Weaver said.

Weaver guessed there is likely a fire everyday in the United States caused by lithium ion batteries.

While the batteries are engineered to not break and remain safe during everyday use, it can be dangerous when they are put into the garbage hauling system, Weaver said.

One warning he had for the public is that if they drop a device or it becomes damaged in some other way, it may still work OK, but once the battery is placed on a charger, something could short circuit and start a fire.

If a battery appears to be swelling, it is dangerous and should be disposed of, Weaver said. In a case like that he keeps it in a special, metal lined case for transport once it is taken to the center.

Another problem is that companies are now selling rechargeable lithium batteries that look like alkaline batteries, which are not hazardous and can be thrown in the trash.

“Now we have the problem of the general public not knowing enough. What do they do with their alkaline? ‘Throw it in the garbage, no problem,’” Weaver said.

The alkaline batteries should not be taken to the hazardous waste disposal area, as it would increase costs for the county to sort through them and dispose of them, Weaver said.

If a battery says it is rechargeable or recyclable, it should be taken to the Mower County Recycling and Hazardous Waste site, where Weaver can collect them and properly dispose of them.

By law, the county is not allowed to accept business waste and companies looking to get rid of their batteries must contact a company that handles that. One nearby business Weaver named is Batteries Plus Bulbs in Owatonna.

The law also says car batteries are supposed to be taken to stores that accept them, while the button batteries found in watches and hearing aids must be returned to the store they were purchased from, Weaver said.

The Mower County Recycling and Hazardous Waste site is open for accepting hazardous waste, including rechargeable batteries, from 8 a.m.-noon and 1-5 p.m. on Wednesdays.

Crystal Miller has accepted the position of publisher for the Austin Daily Herald, succeeding Jana Norman, who left the Herald... read more