The area is still feeling the impact of this weekend’s storm and will continue to do so into the early evening hours.

Portions of southeast Minnesota are currently in a blizzard warning, including Austin. The warning is in affect until 6 p.m. Saturday.

According to the National Weather Service, periods of light snow will continue into the afternoon with little accumulation, but bitter winds will cause whiteout conditions, especially in open and unsheltered areas. Wind gusts could be as high as 40 mph. 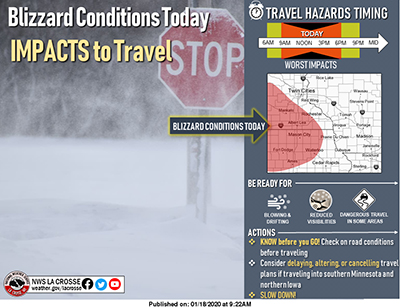 According to the Minnesota Department of Transportation, most roads throughout Minnesota, including southeast Minnesota, are completely covered as of 9 a.m. this morning with no travel advised for parts of central and southwestern Minnesota.

As of 9 a.m., visibility was reported at three-fourths of a mile.

According to the Minnesota State Patrol Twitter feed, from 9 p.m. Friday night to 6 a.m. this morning, there have been 47 crashes statewide and 64 vehicle spin-outs.

As of this morning, the NWS has reported that Austin has received near four and a half inches of snow.