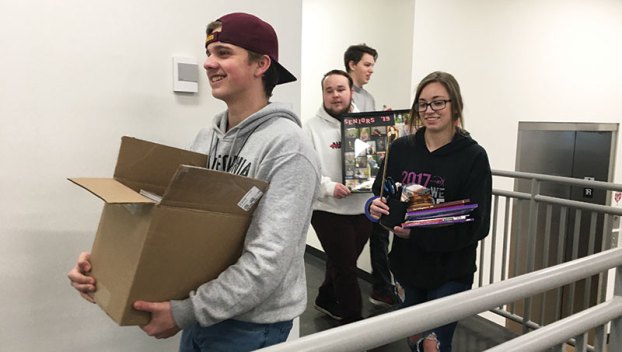 After a years long process, the Austin High School Choir has moved into its new space, built as part of the annex renovation project.

Students arrived in the new choir room for the first time Monday morning, after which several of them helped Choir Director Kalle Akkerman move things up from the old choir room in the basement.

Akkerman used the old choir room both as a director and student. He said there are a number of improvements in the new room.

While he was excited to come back to Austin High School as the choir director in 2018, the old space was not a facility in which he dreamed of conducting class.

“There’s no windows, it is sort of an old dingy basement and to me it still felt like my predecessor’s room,” Akkerman said.

For him, the old space will probably always seem like it should belong to his old teacher, Brian Johnson. When Akkerman first started, it felt like he was holding the space for Johnson. The new room gives him a chance to start fresh and make it his own.

Akkerman said that seeing the new space completed is amazing.

With the new room being larger, having mesh ceiling tiles and a concrete floor, the sound quality is better and it is not as deafening as the old space, according to Akkerman. He said the room is small enough that mistakes can still be heard, allowing them to be identified and fixed, but the acoustics bolster singing just enough to give students confidence.

“This room is like the Goldilocks of acoustical space for both practice and performance,” he said.

Still to be added is a machine that will allow the choir to match the acoustics of other locations, which will allow them to see what their singing sounds like in areas like a cathedral or a location where it will for a contest. Akkerman said this will give Austin a leg up on other choirs they compete against at events.

Superintendent David Krenz said the project, which consists of adding a second story onto the Annex building, creating new spaces for the band, orchestra and choir, in addition to the MacPhail Center for Music, was made possible by a donation from the Hormel Foundation for 60 percent of the cost. Working with the MacPhail Center gave the school access to experts to tell them what features would be good to add, such as the acoustic machine.

“It wasn’t just about putting a new space in and moving them (students) from one area to another,” Krenz said. “It was about, ‘What else can we do to take our program to the next level?’”

Krenz added that this project gave a much needed upgrade to the facilities and will serve the district well for years to come.

The full renovation project is expected to be done this spring.

Three charged in domestic situations; All had prior assault convictions