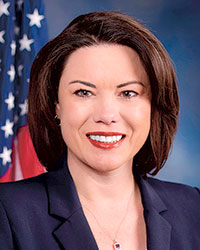 Erika Cashin, of Apple Valley, is currently a lieutenant colonel in the Air Force Reserve and has been an advocate for women veterans as well as a human resource executive.

Regina Barr, of Inver Grove Heights, was elected to the Minnesota House in 2016 but lost to Democratic challenger Ruth Richardson in 2018. Barr is a small business owner.

The 2nd District includes southern Twin Cities suburbs and part of rural southeastern Minnesota. It was traditionally Republican territory but has been a swing district in recent elections.

Keep recycling: Some say financial challenges in the industry could spur innovation

By Martin Moylan MPR News/90.1 Recycling programs in Minnesota and across the country have hit a rough patch, as prices... read more