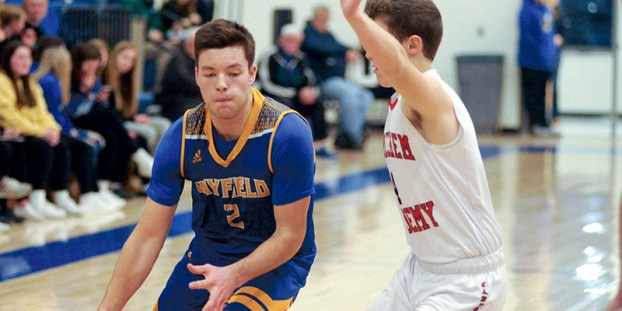 Patrick Towey drives to the hoop for the Vikings against FBA in Hayfield Friday. Rocky Hulne/sports@austindailyherald.com

Fritcher impacted the game on both ends of the floor as he finished with 14 points, 10 rebounds, a pair of steals and one emphatic blocked shot that got the crowd going as the Vikings turned a one-point halftime deficit into a blowout win.

Fritcher is probably more known as one of Hayfield’s ace pitchers that guided the Vikings to state last spring, but he brings just as much energy to the court as he does the diamond. 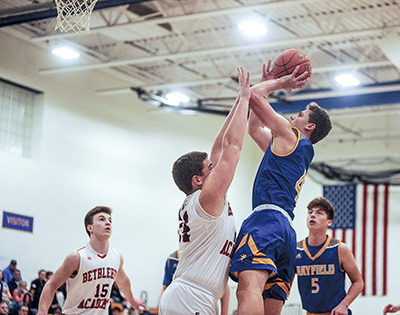 “I’ve always been that way in sports. I always try to give my best effort in baseball or basketball,” Fritcher said. “If it helps the team, I like to do it.”

Fritcher’s play of the game came when he dove to the ground to grab a steal and was able to pass to Ethan Slaathaug from the floor for an assist.

“That play was Easton in a nutshell. To dive on the floor and in the same motion pass it to Ethan for a lay-up. That’s his role on this team is to get loose balls and make hustle plays,” Hayfield head coach Chris Pack said. “He gets us going with plays like that.”

Slaathaug added 24 points in the win as he gave the Vikings (5-2 overall) a cushion after connecting on a three-pointer to put them up 40-35 early in the second half.

“We were a different team in the second half. That’s not how we play in the first half,” Pack said. “It was a little lethargic and they were beating us to loose balls and getting offensive rebounds. We got sloppy, and that’s what happens.” 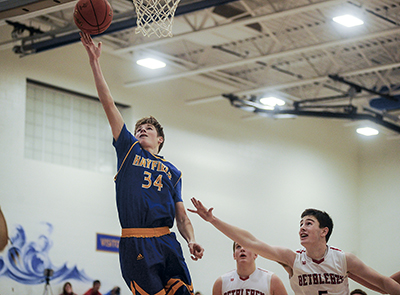 HAYFIELD — It was a typical game for Lyle-Pacelli junior Jed Nelson, but it’s also one he will remember for... read more