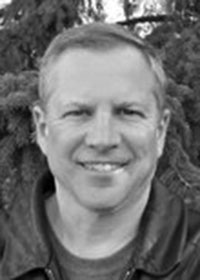 John Geoffrey Enwright was born on June 10, 1958, in St. Petersburg, Florida, to parents John and Marilyn. In 1966, John and his family moved to Warrensburg, Missouri. They attended First Presbyterian Church, where John began to develop his strong Christian faith, starting him on the path to ministry. In 1976, John graduated from high school and went on to earn a B.A. in sociology from Central Missouri State University in Warrensburg. He then attended McCormick Theological Seminary in Chicago, Illinois, graduating with a Masters of Divinity degree.

John’s first ministry experience took place the summer after his first year of seminary, when he was student pastor at First United Presbyterian in Oakdale, Illinois. Having never taken a preaching class, he learned on the job, turning in his Sunday sermons each week to a seminary professor. John served his seminary internship at First Presbyterian in Paw Paw, Michigan, under the mentorship of Pastor Nelson Lumm. John looked back on Pastor Lumm as one of the greatest influences in his life, along with the Rev. Jack Kurtz, the Warrensburg church minister when John was a teenager.

John’s first call was in 1984 to be assistant pastor at Westminster Presbyterian in Austin, Minnesota, where he was ordained. John met Susan after he spotted her in the greeting line at a Sunday service. Susan being a newcomer to town and to the church, John felt it only right that he pay a pastoral call upon her, and their life together began. They celebrated their 32nd wedding anniversary on Aug. 22 of this year.

In 1990, John and Susan moved to El Dorado, Kansas, where John served as pastor of the First Presbyterian Church. Daughter Stephanie Kathryn was born in 1990, and her sister Rachel Grace followed in 1992. John regarded those early years of marriage, when his children were very young, as among the sweetest of his life. John put his family first – always – and was a devoted, supportive, loving, and patient husband and father, always ready to listen, to help, to encourage, to celebrate the ups of life and to sympathize with the downs. He was present in his children’s lives in every way it was possible to be present. He was enormously pleased with them and proud of the fine young women his daughters became.

John was a voracious reader, often having several books underway at the same time. His mother and daughters kept him well supplied with books and he was a frequent library patron. John also loved to write, keeping a journal of sorts throughout most of his life. In his younger years, John ran many 5K races, and as he grew older, a walk outdoors became a daily occurrence.

John’s other great passion was basketball – all basketball – from a fifth grade game to the NBA. Because John’s mother was on the faculty at the college in Warrensburg, John attended the college laboratory school on campus. One day after school in third grade, he wandered into the campus gym where the CMSU Mules were practicing under Coach Norm Short, and his life changed. Coach Short graciously allowed John to hang around during the practice, and for the next six years John attended almost all the practices and home games as ball boy.  He loved being around the college players, and they treated him as part of the team. John was the star of his eighth grade basketball team and played as a high school freshman, but his sophomore season was cut short by a brief but serious illness. John was the student manager for the CMSU Mules for one year during college, played pick-up noon ball at the YMCA in Austin, and coached a sixth grade girls youth league team. John remained a huge fan of the game at every level, attending local games wherever he lived, following teams and coaches around the country, and watching all the TV college and NBA basketball he could manage. He later earned his referee certification and officiated at a number of elementary and junior high games.

John and his family moved to Minnesota from Kansas in 1999, and made New Ulm their home in 2001. John tried his hand at various occupations, including book store assistant manager, substitute teacher, residential youth home counselor, Christian Education and Youth Director at First Presbyterian in Mankato, Minnesota, and four years working remotely for brother Randy’s political consulting firm. John ended his work career as a production operator at 3M, first in Kit Packaging and then in Hard Goods. He enjoyed the work place camaraderie with his colleagues and particularly liked teaching and helping new employees. After becoming ill, John was grateful for the kindness and support shown him by his supervisors, fellow workers and the 3M nurses.

When John received his cancer diagnosis in October 2016, he resolved to do all he could to treat the disease and underwent approximately 50 rounds of chemotherapy over 2 ½ years. He met the challenges of all the medical interventions, side effects of treatment, and gradual decline in his strength and abilities with grace, courage and good humor. If he ever engaged in self-pity, it was only in private.

After John’s diagnosis, his daughters began making more frequent trips to New Ulm and the family of four spent many happy hours together enjoying the simple pleasure of each other’s company in quiet pursuits at home. John’s larger family traveled often to see him, as did his best friend Bruce Castle, who made the journey from his home in New Mexico numerous times. Highlights during this time were a celebration of John’s 60th birthday in July 2018, attended by many family and friends, and his last Christmas spent with loved ones at his mother’s home in Warrensburg.

John was grateful for the excellent care he received from Dr. Anas Khanfar and the staff of the Virginia Piper Cancer Institute – New Ulm, which became his home away from home during the long weeks and months of treatment. Also greatly appreciated was the care and support given to John and family by the Allina Hospice Team.

A memorial service will be held at 7 p.m. on Thursday, Dec. 12, 2019, at the Minnesota Valley Funeral Home South Chapel in New Ulm with Pastor Kelly Ulland-Klinker officiating. Visitation will be held from 2-4:30 p.m. on Thursday at the funeral home and will continue for one hour prior to the service on Thursday at the funeral home. A celebration of life will be held in spring 2020 at First Presbyterian Church in Warrensburg with Pastor Heather Jepsen officiating. To leave an online condolence for John’s family, or to sign the guestbook, go to mvfh.org. If you wish to honor John, memorials are preferred to the Pancreatic Cancer Action Network, www.pancan.org, or the Virginia Piper Cancer Institute – New Ulm.