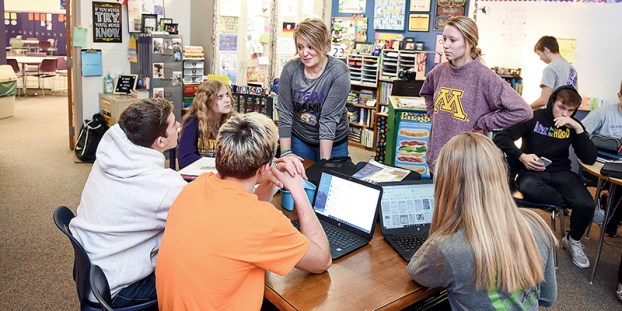 Dekota Steinkamp had just wrapped up his presentation in Jodi Munson’s Introduction to Education 101 class when Munson got the class working on their lesson plans.

Those lesson plans were for the elementary classes they would be instructing as part of the class and it came with a pretty important instruction: “Keep them engaged.”

The same could be said about the class itself. When this class was introduced last year it had just five students. The class is made available through a grant through the College Now program from Southwest Minnesota State University, but in only its first year Grand Meadow school officials were already facing a dilemma.

Is it worth it for only five kids?

“I think one of the first things is, you have to take chances sometimes,” said Grand Meadow Public Schools Superintendent Paul Besel. “Realistically, there were not enough students to sustain it. Knowing it’s the right thing to do, the Grand Meadow School Board and myself said, ‘let’s try it again.’” 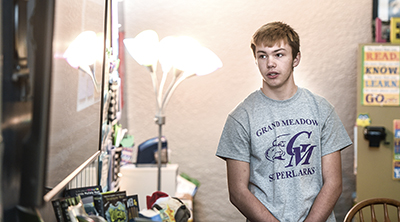 Fast forward a year later and that rolling of the dice has paid off.

“I’m enormously surprised,” said class teacher Jodi Munson. “Last year I was begging for people. I was literally blown away.”

The growth of the class, from five to 19 students this year, has created somewhat of an issue in that there aren’t enough elementary classes to place the students, which it forces some students to be on a waiting list.

Grand Meadow even had to initiate an application process, giving preference to seniors first and then juniors as space was available.

In essence, College Now gives students a taste of what it’s like being a teacher by putting them in the role of teaching. The juniors and seniors are placed in elementary classrooms and as such are required to come up with their own lesson plans in order to teach their own class.

Breaking it down further, Mondays and Wednesdays are lecture days a student may find on a typical day at college. On Tuesdays they are in the classrooms for clinical work, which includes observing the class followed by coming back and putting together lesson plans.

Thursdays they are back in the classroom putting into practice those lesson plans and finally, on Friday, they reflect on the week.

“It opens their eyes,” Munson said. “I’m very truthful and tell them there’s good and bad things (about this job). This is not an easy job, it’s tough, but I can’t imagine doing anything else.” 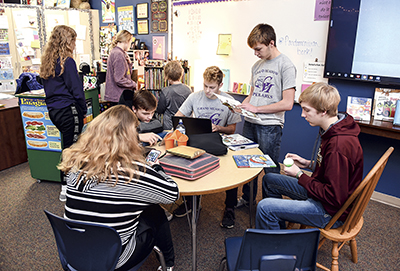 This program’s process is a two-way street, not only giving students valuable experience, but also opening another gateway into education that is seeing a shortage of teachers.

“There are a lot of different careers right now where there are shortages of employees and teachers are one of them,” Besel said.

There is another reality to this class. Not all the students in the class will go on to teach. For some students, it is simply a chance to receive three college credits alongside high school credits.

And for both Besel and Munson, that’s okay, because at least they know now, rather than after having already spent time and money at college only to find out teaching wasn’t for them.

It’s also a chance to get skills that are applicable outside of education.

“They might move on and go into education, then there might even be kids that don’t want to be teachers, but they learn really good skills to be good human beings,” Besel said.

Gina Stier, a junior, is one of those students that isn’t so sure about teaching but is sure about the skills she’s learning through the class. It’s helping her both at home and at her job working for Wildwood Grove Assisted Living & Memory Care in neighboring LeRoy.

Even though she still remains somewhat undecided on what she wants to do after high school, she does know how she wants to apply these skills she’s learning.

“I’m kind of undecided on what I want to do, but I wanted to go along the lines of helping people,” said Stier, who is leaning currently toward a career in nursing. “My people skills have broadened since I’ve started this class.”

On the other side is senior Destiny Lauseng, who definitely has set her sights on a career in education, through she’s coming at it from a slightly different angle.

“I’ve always had a passion to help people and for the longest time I’ve struggled with school,” she said. “I want to find innovative ways to help students so they can excel.” 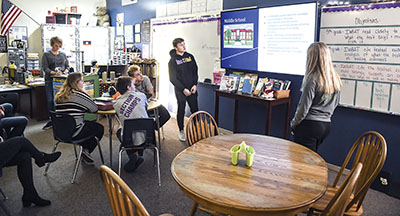 Having taken the class, Lauseng quickly recommends it to anybody wanting to go into education.

“I feel like this is the best path to get a lot of creative freedom and help people,” she explained. “I really like seeing the progression in kids.”

That’s the kind of reaction that Munson likes to see, the moment when the idea of teaching clicks.

“It’s like a lightbulb went off for them,” Munson said. “When they start talking like a teacher, they are thinking about what they need for ‘my kids.’ They are making a connection.”

“It’s awesome,” Munson said about the two courses. “I’m just super excited about it. It’s a lot of work making sure all my kids are planning, but I just want them to be successful. That’s when I get excited. I can’t imagine not teaching this class now.”