HAYFIELD — It was a typical game for Lyle-Pacelli junior Jed Nelson, but it’s also one he will remember for quite some time.

Nelson scored his 1,000th career point as the Athletics won their fifth straight game by topping Wabasha-Kellogg  65-51 in the Hayfield Holiday Tournament Friday.

Nelson brought energy on defense throughout the night, scoring nine points, including a jump shot that extended L-P’s lead to 49-45 with three minutes left. Nelson wasn’t sure how close he was to 1,000 before Friday’s game, but he knew it was near.

“I didn’t know at all where I was at. I knew I was close, but not with set numbers,” said Nelson, who also had three steals and two rebounds. “It means a lot to reach that goal with my teammates and guys I’ve been playing with forever. The win makes it better.” 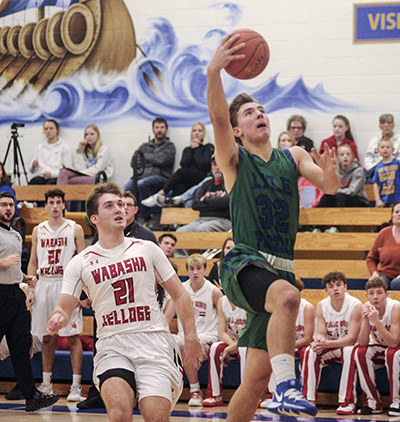 Jed Nelson goes up for his 1,000th career point in the Hayfield Holiday Tournament in Hayfield Friday. Rocky Hulne/sports@austindailyherald.com

W-K head coach Scott Koenigs has known Nelson for a long time and has coached Nelson since he was a seventh grader.

“He does what we ask him to do and he’s done a tremendous job. His family and my family are very close and I’ve known him since he was a little baby,” Koenigs said of Nelson. “I’m very proud of him.”

Zach Bollingberg had 24 points and he led L-P’s comeback by knocking down four three-pointers.

“We haven’t really had a signature win yet and we knew we needed a big win. We knew we couldn’t play like that the rest of the game and we knew were going to start making shots. We got in a groove,” Bollingberg said. “If we can come out strong every game, we can start blowing out teams and not have to wait until the end of the game to make a run.”

Cole Walter finished with 14 points and four assists for LP (5-3 overall) and Buay Koak had 16 points and 14 rebounds. 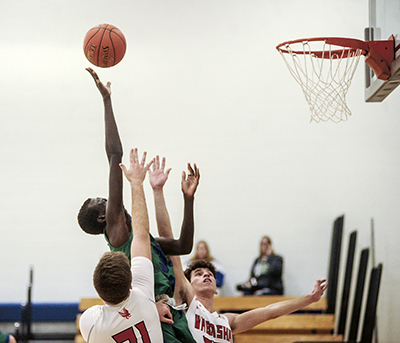 Buay Koak powers up for a score for the Lyle-Pacelli boys basketball team against Wabasha-Kellogg in Hayfield Friday. Rocky Hulne/sports@austindailyherald.co