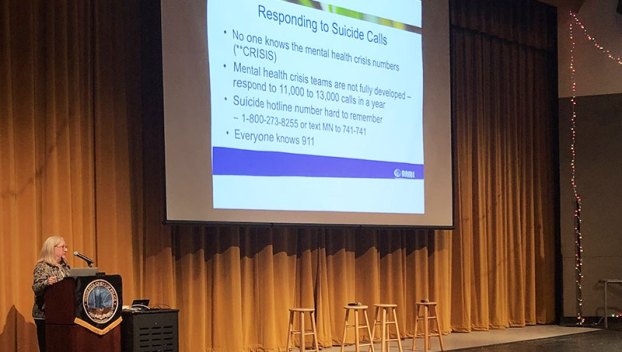 Minnesota cops rethink how to respond to suicide calls

Law enforcement leaders from across the state gathered in Bloomington Wednesday to talk about how best to respond to people threatening to kill themselves.

Some police departments around the country have shifted how they respond to suicide calls, said Andy Skoogman, executive director of the Minnesota Chiefs of Police Association.

“There are agencies across the country that are simply not showing up or they’re showing up to the call, determining that the individual is not a threat to anyone other than him or herself, and they’re leaving,” Skoogman said. “That’s a drastic departure to how law enforcement has responded to those calls in the past.”

A recent survey by the association of more than 300 chiefs in the state found that fewer than 20 percent of Minnesota police departments referred calls about people threatening suicide to mental health professionals. Another 25 percent of departments had officers leave if they couldn’t make contact with the person having a mental health crisis.

“We’re simply trying to get an understanding of what’s happening in Minnesota,” Skoogman said. “Who is doing what? And what we can do to do better in terms of finding a solution that doesn’t put officers in jeopardy but also helps save a life?”

Bloomington Police Chief and the police chiefs association president Jeff Potts said his group brought together law enforcement leaders from around the state to start sharing information on how individual departments are approaching the issue.

Some police departments fear so-called “suicide by cop,” where officers are called to a scene and confronted by an armed person in a mental health crisis who try to provoke the officer to fire at them. In some cases, the officers use deadly force.

“An officer wants to go out and help, they’ve taken the oath they want to help people,” Skoogman said. “But in many places, if they’re not the right person to help, how do we connect an individual who’s threatening to kill him or herself with the right resources — there has to be a way to do it.”

The Minnesota Chiefs of Police Association said Wednesday’s event was a first step in addressing the issue. They may consider drafting legislation or getting grants to help departments connect people in crisis with mental health providers who can help.