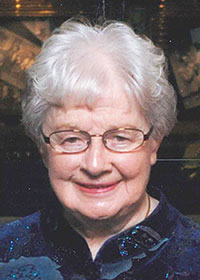 Maydene was born on March 2, 1929, to Albert and Mabel (Fisher) Hopfe in Austin. She graduated from Austin High School in 1947. Maydene was united in marriage to Arthur Bernard McDonald on June 11, 1949, at St. Augustine Catholic Church. They resided in Austin while raising their daughters, Barbara and Susan.  Maydene was a homemaker and also worked part-time in the children’s department at Fantles. She was a former member of First United Methodist Church.

Maydene enjoyed reading, dogs and cats, gardening and knitting. She was a devoted caregiver for several loved ones. She continued to enjoy monthly gatherings with a group of her high school classmates. Despite her physical challenges, Maydene was fortunate to travel with her daughter, Susan, and son-in-law, Mark, on cruises to Alaska and Hawaii as well as a trip to Washington, D.C.

Private family services have been held with burial at Oakwood Cemetery in Austin. Arrangements by Clasen-Jordan Mortuary. Memorials are preferred to the Mower County Humane Society.