Man pleads guilty to trying to have sex with teen girl; Victim ran and hid in bathroom 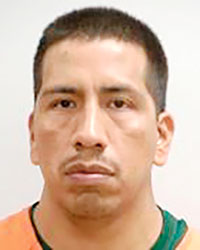 Court documents state a 17-year-old girl, who was known to Alejo, reported that on or about Aug. 12, she had been sleeping in a basement bedroom at Alejo’s residence when she woke up to him crawling on top of her. She stated he had pulled her shorts and underwear down, but was not aware if he touched her before crawling on top of her because she was a heavy sleeper.

The victim reported pushing Alejo away, running upstairs and locking herself in a bathroom. She said he knocked on the door and asked her to come out and talk to him. She indicated he made comments that he thought she wanted it too and said they should talk about it so another resident of the house would not find out. She did not come out and asked for someone else at the residence to come into the bathroom. When Alejo went back to sleep, the victim gathered her belongings and left the house.

The victim then reported the incident to another female, who confronted Alejo about it. Alejo told her he wanted to sleep with the victim and that he pulled down her shorts and underwear and touched her inappropriately after getting into bed with her. He indicated he was undressed during the assault because he thought the victim wanted to sleep with him. He also said he turned the victim’s phone off during the assault and tried to talk with her because he did not want anyone to find out.

An officer spoke to Alejo, who admitted he tried to have sex with the victim and had removed her shorts and underwear and got in bed with her. He also said he touched her inappropriately. When she ran, he said he followed her because he wanted to tell her what he did was not right and wanted to explain himself.

Alejo will be sentenced on March 19.