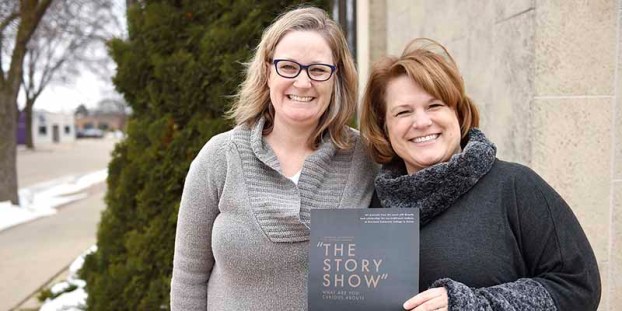 Jenni Braaten, left and Jennifer Lawhead, members of the Austin branch of the American Association of University Women, hold up a event poster for “The Story Show,” which will have community members sharing stories of curiosity. Eric Johnson/photodesk@austindailyherald.com

A story to tell: Community members to share stories of curiosity at ‘The Story Show’

As part of an event hosted by the Austin branch of the American Association of University Women (AAUW), members of the Austin community will be sharing stories of curiosity.

“The Story Show,” has been a program held in Albert Lea for years, where members of the community are invited to share stories from their lives related to a specific theme.

Now, organizers are bringing the event to Austin with eight people sharing a story about how curiosity has affected their lives.

Photographer William Taufic will be one of the people taking part in “The Story Show.” Eric Johnson/photodesk@austindailyherald.com

“Storytelling has been around since the beginning of time and it is something that unites people,” said organizer Jenni Braaten.

Jennifer Lawhead, also an organizer for the event, said she is drawn to the power of people’s stories and how it tells someone a lot about that person.

It also enriches the listener’s life, she said.

“It also brings some richness to your own life about your story and how that impacts choices,” Lawhead said.

When Braaten has been to similar events in Albert Lea, hearing other people’s stories has affected how she has viewed the world and issues.

With all eight storytellers being from Austin, the event will also tell people about their community, she said.

Embrace your inner chill: Lots to do outside during the frigid days

Here is another way to think about winter: Instead of railing against the snow and ice, think of those chilly... read more