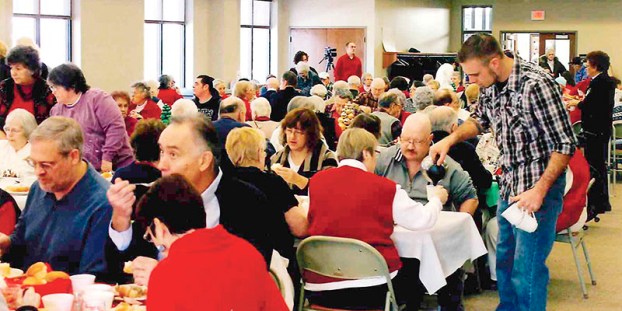 Crowds of people enjoy the community Christmas dinner hosted by the family of Peter Klein. The family has hosted the event every year since 1998, when Klein died. Photo provided

What started as a way for a family to cope with the loss of a loved one has become a Christmas dinner for the community lasting more than 20 years.

In June of 1998, Peter Klein died in an accident, leaving behind a family that would miss him dearly.

In the fall of 1998, the family tried to find a way to make the first Christmas without Klein easier.

“The closer we got to the holidays, it just became very difficult to know that we would be spending Christmas without him,” Klein’s mother Gladys Bliss said.

After hearing about a community Thanksgiving dinner, they decided to host a community Christmas dinner, originally held at the Austin Senior Center.

For the first few years, the family cooked all the food except the turkey for the traditional Christmas dinner, before eventually having it catered as more and more people came, Bliss said.

“It’s been something the whole family really has been involved in and they’ve never considered not doing it,” Bliss said.

While Bliss’ grandaughter, Danielle Morem, was 11 when the family started organizing the community Christmas, she said for some of her younger cousins, this is the only Christmas they remember.

Every year, the event has grown more and more, she said. 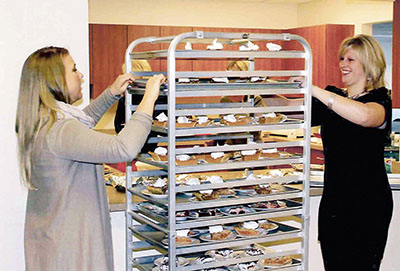 Family members from all walks always chip in to help prepare and serve the annual Christmas meal. Photo provided

In the beginning, the grandchildren would fill the role of entertainment, singing or playing instruments on stage during the event.

Now, Morem is managing the event while in some cases great-grandchildren are now helping.

Seeing her family always participate in the event makes Bliss thankful. Whenever the family gets together, everyone has a fun time, she said.

“It just pleases me to no end,” Bliss said

Holding the event has really helped with the grief the family felt at not having Klein with them for the holidays, Bliss said. While the death of her only son was always on her mind, staying busy planning the event kept it from being constantly at the forefront.

“It helped me tremendously,” she said.

Klein was her youngest of five children and was doted on by his four older sisters, she said.

Morem said Klein was always the fun uncle that every one of his nieces and nephews enjoyed spending time with.

Although they have a large family, hosting the community Christmas was a way for them to not have to be alone as a family with their grief, Morem said.

Part of the reason the event has continued is that the family does not want others to feel that sense of loneliness, Morem said.

While all of the other holidays would be a sad time, Morem remembers it being a very fun and happy Christmas.

Fun and happy events are something that would fit in well with the kind of person Klein was. Bliss said Klein was the type of person who could stir up the fun kind of trouble as soon as he walked in the house.

The community Christmas has also helped other people.

Bliss said there have been people who have come to the Christmas dinner since it began so they would have people to spend the holiday with.

In one case, a widow has continued to come to the event that she and her husband attended every year.

“What keeps us going now is the way people appreciate it,” Bliss said. “It just makes everyone feel good.”

As for what Klein would have thought of the community Christmas, both Bliss and Morem know he would have loved it.

Transportation is available on request.

With the Hormel Foods plant employee fundraising campaign for 2019 over, nearly $121,000 is making its way to the United... read more