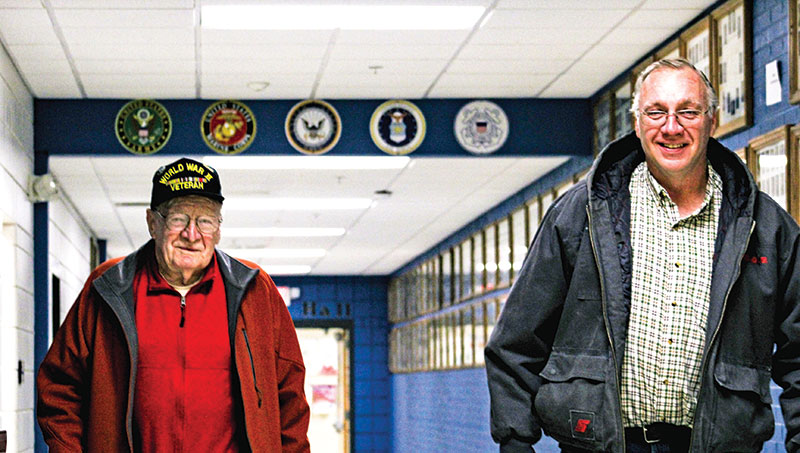 Seaman First Class Anthony Slowinski, 92, of Austin, (left), and his son, Russell Slowinski, walk down the Alumni Hallway at Lyle Public School on Veterans Day. The hallway will eventually honor all of Lyle’s military servicemen and women who were alumni.

Breakfast was served in the early hours, where students invited a veteran to come and be served. More than 30 veterans showed up in attendance and had chances to interact with the children. Shortly afterward, the veterans headed off to the gymnasium, where more than 400 people made up of families, teachers, staff and community residents were there to honor them.

The American Legion Post 105 Color Guard was part of the ceremonies, and Superintendent Bryan Boysen gave his welcoming remarks to the audience, reminding them about the importance of honoring those who served their country. Veterans spanning different eras from World War II to the Iraq War were visibly stunned by the large showing of appreciation from the Lyle community.

“We still need to continue to support our veterans,” Boysen said. “We want to humble ourselves for these men and women who gave the ultimate sacrifice. It’s a pleasure for us to bring the community together and to honor their service. It went really well.” 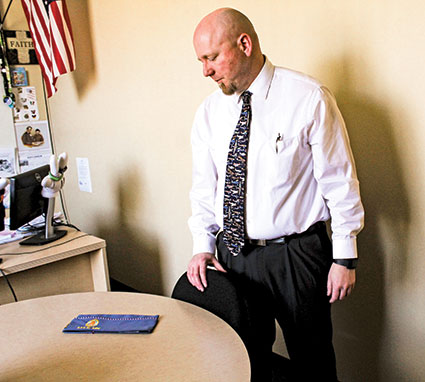 Lyle Superintendent Bryan Boysen has a proud legacy of family members serving in the military. On Veterans Day, he shared the importance of honoring the men and women in the community who answered the call to protect the country. He proudly joined the Sons of the American Legion as a way to honor his father’s service, and to help local area veterans.

It was the largest attendance reported for a Veterans Day program at Lyle Public School within recent memory, yet this type of support for the military was not a surprise, Boysen said. Since 2007, the Veterans Day Program has been organized by Tammy O’Connor, a fourth grade teacher and Lyle Elementary School Student Council advisor, who believed it was important to observe Veterans Day and remember those who served their solemn duty to protect the United States from ongoing threats around the world while preserving the freedoms that many Americans sometimes take for granted.

“We wanted to recognize our local veterans and invite them here for breakfast and have our students make those connections,” O’Connor said. “Through the years, this program provided that opportunity for our students to recognize the veterans’ service and to thank them personally.”

During the program, students performed several patriotic songs like “You’re a Grand Old Flag” and listened to various stories from speakers like Lyle Middle/High School Principal Jamie Goebel, a Minnesota National Guard veteran who previously served as a guard for the Tomb of the Unknown Soldier in Arlington National Cemetery, an honor that very few are given.
Lyle continues to educate their students about their civic duties and what it means to play an active part as a citizen. Though state law requires that Minnesota students are given the opportunity to recite the pledge at least once a week, Lyle students recite the pledge every day of the school week. Lyle American Legion Post 105 continually makes donations to the school district and supports maintaining and improving the quality of education that the students receive. 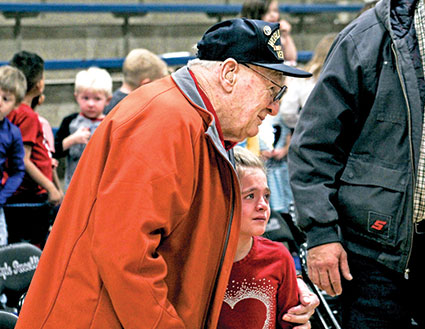 First Class Seaman Anthony Slowinski, 92, hugs his granddaughter, Nevaeh Slowinski, 8, and a Lyle Elementary School third-grader, who was part of the school’s Veterans Day program that honored their local veterans their service. Anthony, a World War II veteran, said he was proud of his granddaughter, calling her “the star of my eye.”

Teaching them about patriotism, the students made an impact on the veterans, including World War II veteran Anthony Slowinski, 91, of Austin. Having served the U.S. Navy from 1945-1949, he was visibly touched by the respect students showed him and his fellow veterans.

A student unknown to him gave Slowinski a colored drawing as a gift. His granddaughter, Nevaeh Slowinski, 8, a Lyle third-grader, read a poem and led the Pledge of Allegiance during the ceremony. It was a proud moment to see the younger generation continue to honor their military service.

“It’s so nice to see other members of the military here, and being honored,” Anthony said. “There’s so much support for the military in this community, They put on a great program that drew us to this. The whole country celebrates us today, and it makes us proud to serve this country. My granddaughter is the star of my eye.”