Festive city: Christmas in the City has always provided holiday cheer in Austin 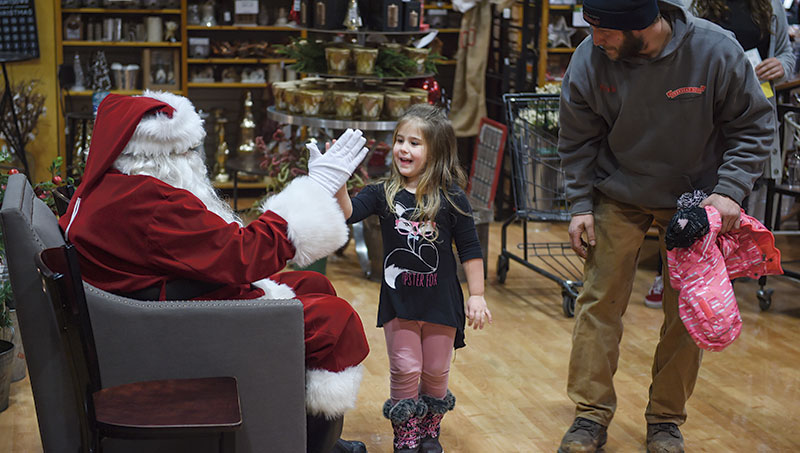 Scarlet Williamson gives Santa Claus a high-five after getting her picture taken with him during Christmas in the Southwest. Herald file photos

Christmas in the City, Austin’s premier holiday event, has been in place a long time, even though it looks far different than it did when it was first celebrated.

Back then — over 30 years ago — the celebration was held exclusively in the downtown and was established upon the recommendation of the Downtown Association. The names of business owners Gretchen Ramlo, Bonnie Mogen and Jean Hastings pop up in conversation when people speak of the early beginnings, as well as that of the late Larry Haugen, who was the executive director of the Austin Area Chamber of Commerce at the time.

Ramlo, who operated Gretchen’s, a clothing store, recalled the association was happy with the customer traffic brought in by the newly-created Cedar River Days, a forerunner to Freedom Fest.

“Cedar River Days had just taken off,” Ramlo said. “So we thought, ‘We need something for the winter.’”

That turned out to be Christmas in the City, established in 1988.

There is little question as to the reason for Christmas in the City’s enduring success.  Austin merchants dove into the celebration with a sleigh-load of holiday cheer — and a willingness to do lots of work.

Memories of the first years are a bit foggy, said Hastings, longtime owner of Hastings Shoe and Repair. 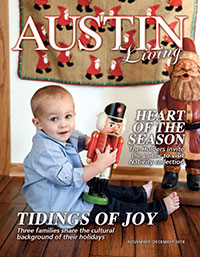 Find this story and more in the November-December edition of Austin Living Magazine available now.

“But there has always been a good turn-out, especially by families, I do know that,” Hastings said. “It’s always been a fun night. The music, the kids coming in for treats. I always had doughnut holes, because I knew both the kids and adults would like them.”

Meeting Santa was the main event during the first year, said Ramlo, and he continues to be the centerpiece for the celebration that today encompasses every quadrant of the city and covers four nights.

But in its first year, Christmas in the City was held on one night, on the day after Thanksgiving.

“There was an alley behind my shop and that’s where we would get Santa ready for the kids,” Ramlo said. As now, the Chamber Ambassadors played a big role in preparations.

She said among a host of good Mr. and Mrs. Santa couples, she most fondly remembered the late John O’Rourke as being among the best. O’Rourke was the mayor, too, and was one of Austin’s best cheerleaders.

“John and his wife just loved playing Mr. and Mrs. Santa Claus,” she said. “John would have a ball talking with the kids; he’d pull them right up on his lap and start chatting away. But we had to tell him one year, ‘John, you can’t talk to every child for five minutes — we’ll never get through them all!”

“I also remember Santa coming down Main, with all the kids following Santa to the stage where he would light the decorations, and they were all holding light sticks,” Ramlo added.

Holding the celebration in changeable Minnesota weather wasn’t without its challenges, Ramlo said.

“We have had every kind of weather,” she said. “I remember slush — eight inches deep, in the middle of the street. Trying to get through that — ugh.”

But the show always went on, although there was one year when Chamber members decided that holding it on Saturday, instead of the Friday after Thanksgiving, might make it even more successful.

“We got a huge backlash, huge,” Ramlo said with a chuckle. “We changed it right back the next year.” 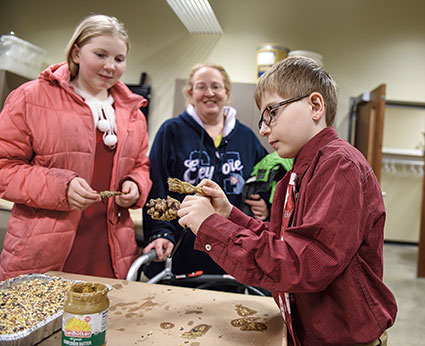 Today, Christmas in the City encompasses four nights. The first night, always held on the Friday following Thanksgiving, is the celebratory kick-off in the downtown. This year the kick-off is from 5:30-7:30 p.m. on Nov. 29. Kids, as they have for years, are invited to walk with Santa and others to the stage where Santa flips the switch of the holiday lighting displays. Wagon rides, live entertainment, kids’ train rides and other activities, goodies and crafts prepared by individual businesses are the traditional features.

Activities may shift a bit each year.  For instance, during last year’s kick-off, kids enjoyed everything from learning a dance with the Sugar Plum Fairy (Bridget’s Dance Conservatory) and making a necklace (George’s Pizza); to writing a letter to Santa (Spam Museum) or making a Polar Express bookmark (at Sweet Reads Book and Candy). Believe us — that is just a small sampling of treats and activities.

At some point — no one really recalls the exact year — it was decided to expand the celebration, to be held on different nights in the southwest and northwest parts of the city, to give those businesses a chance to participate. Finally, a few years ago, Christmas in the City came to the east end as well, said Jeanine Nelson, who heads up major events for the Austin Area Chamber of Commerce. 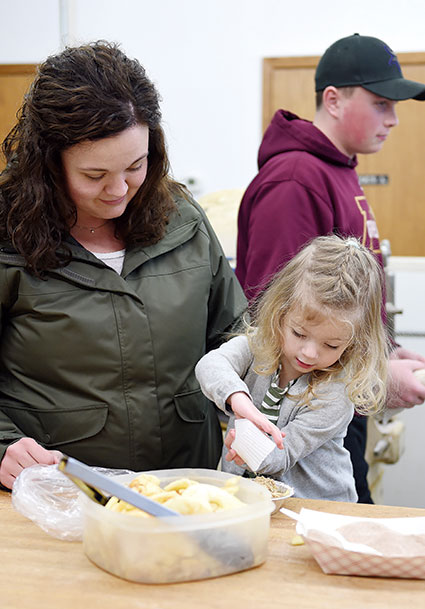 Clara Hamer makes her own apple crisp at Super Fresh Produce Bakery during Christmas in the Northwest.

The move to expand the celebration is a sign of not only the event’s changeable nature, but a community’s love of the event.

“Christmas in the City has been adapted to meet the needs of the city and I think everyone appreciates that,” she added.

Nelson noted that the expansion also allows families who cannot make one event to attend another that is more convenient. The full list of activities being planned by individual businesses in each area is still being compiled and will be printed in brochures to be handed out just before the season begins.

It’s that time of year again where there is a Santa Claus on every street corner, in every mall, and in a sleigh flying across the globe. We want to share your children’s photos with Santa in the January-February issue of Austin Living Magazine.

Simply e-mail your photos to photodesk@austindailyherald.com. Please include your child’s name and parents’ names. Submissions should be sent by December 4, 2019.

Data: Minnesota farmers serve up the most turkeys in…