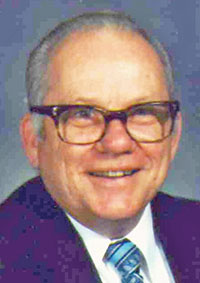 He was born Dec. 1, 1925, to Ernest M. and Erma (Boyd) Diederich in Austin, Minnesota. Bill attended Pacelli and Austin Public Schools.After graduation, Bill enlisted in the U.S. Navy on June 12, 1943, and served aboard the USS Mendocino as a Signalman First Class in the South Pacific during World War II. Following the war, he came home and married Merriam Nelson on Dec. 27, 1947. They moved to Duluth, Minnesota, and he attended the University of Minnesota-Duluth, where he graduated cum laude. His first and only teaching post was in Riceville, Iowa, where he ran the music program from 1950-1972. In order to further his education, he attended summer school at the University of Iowa and graduated with honors with his Masters. In 1972, Bill accepted the position of high school principal, where he stayed until retirement in 1987. Bill was involved in many community programs during his time in Riceville: Boy Scout leader, Booster Club, volunteer fire fighter, Jaycees, Community Club, American Legion, Knights of Columbus, Riceville golf course, and choir leader for Immaculate Conception Church. He was known far and wide for his beautiful voice and was requested by many to sing for weddings, funerals, and other celebrations. Some of his favorite ways to enjoy life were golfing, playing cards with friends, and of course fishing with the gang on Eighth Crow Wing. In later years, you could always find him at Kenny’s Oak Grill sharing a cup of coffee and a few stories with the Kenny’s crew.

His body has been donated to the Mayo Foundation for research and education.

There will be a memorial service from 2-4 p.m. on Saturday, Oct. 19, 2019, at in the church hall of Immaculate Conception Church in Riceville. There will be a private burial at a later date. In lieu of flowers, the family is suggesting donations to the Riceville Family Care and Therapy Center, where Bill spent the last three years of his life with his guardian angels. Arrangements are by Mayer Funeral Home. Condolences may be left online at www.mayerfh.com.