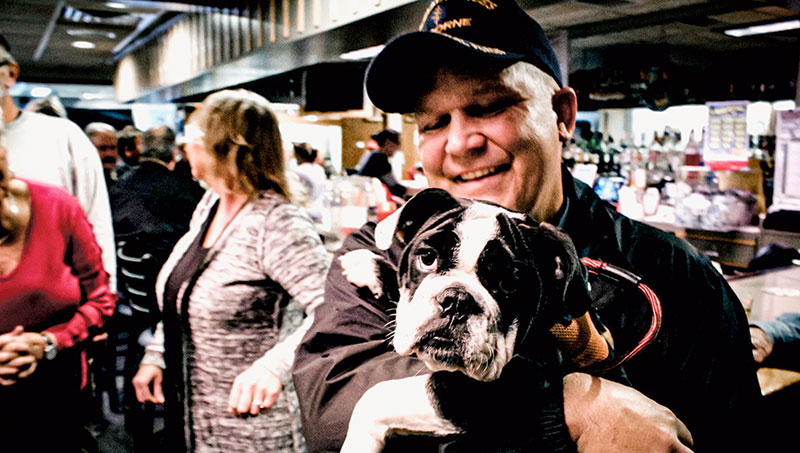 Kirk Schultz of Aitkin, Minnesota, was a former Green Beret who was injured during an airborne mission. He was selected for Bullies for Vets by the American Legion Riders Post 91 and Leah Delaney of Lonely Acres in Austin to receive a bulldog puppy as a companion to help him through the ups and downs of life. Hannah Yang/hannah.yang@austindailyherald.com

As First Sgt. Kirk Schultz, a former United States Special Forces veteran, moved through the crowded bar at the American Legion Post 91 in Austin last Thursday night, his eyes scanned the room before he found what he was looking for.

Resting in the arms of Zack Naylor was a small, black and white bulldog. Affectionately named “MJ,” the puppy caught Schultz’s stare and started wagging her stubby tail with curiosity.

“Hi there,” the man spoke with a tender voice, “Aren’t you a cutie?” To which Naylor slowly handed the dog over to Schultz, who held MJ like a new infant. The puppy yawned and gave her new pal a lick on the cheek. Those inside the Legion started applauding the newly bonded duo.

The Schultz Family of Aitkin, Minnesota, was chosen by the American Legion Riders Post 91 and Leah Delaney, owner and bulldog breeder for Lonely Acres outside of Austin, to take home a bulldog puppy that would serve as a loving companion for her new owner and be there as a constant support through the ups and downs of everyday life.

Bullies for Vets is a program that was launched last year by Delaney, who originally participated in the Pay-it-Forward initiative in Dexter. She felt something spark as she thought of what she could do to serve those who helped serve the United States.

Having a special place for veterans in her heart, Delaney decided that she would gift a bulldog puppy to a deserving veteran who may be struggling with a physical or emotional trauma from serving overseas in combat. Last year was the first time that Delaney gifted a puppy. 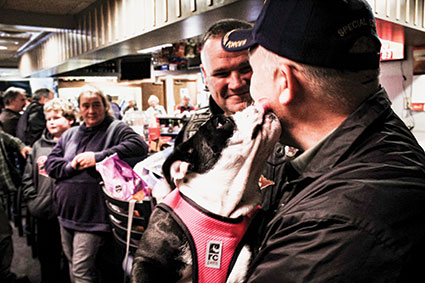 MJ, a bulldog, gives her new owner Kirk Schultz, a kiss inside the American Legion Post 91. Schultz is a former United States Special Forces veteran and was chosen to be the recipient of MJ from the Bullies for Vets program started by Leah Delaney of Lonely Acres in Austin, and the American Legion Riders Post 91. Hannah Yang/hannah.yang@austindailyherald.com

This year, the American Legion Riders wanted to take the lead on helping with the Bullies for Vets program and help connect veterans who were in need of a support that could provide unconditional love and being there for their owner.

With five applications to choose from, the group consisting of the American Legion Riders and Delaney had to narrow down their choices. Some of the applicants were looking for a certified service dog, which the bulldogs were not. However, it’s Delaney’s hope down the road that a certified service dog could be offered if there were trainers willing to donate some of their time for the cause.

“They’re to be companions and just to be there for their veteran,” Delaney said. “There were so many deserving veterans, and there were three who we really liked. At the end, we needed to choose the one who will give MJ the best home and then, that’s how we knew.”

Once the winner was chosen, the selection committee needed to make an important phone call. As soon as the decision was made, Delaney picked up the phone and dialed the number.

A win for puppy love

When Kayti Schultz, Kirk’s daughter, submitted a nomination form on her dad’s behalf, they were already going through a mourning period of losing another bulldog puppy several months prior. A hole was left, and the family desired to have another bulldog come into their lives.

Stumbling across the Bullies for Vets page on Facebook, Kayti felt it was fate intervening and giving her a sign that she needed to enter her dad to win a bulldog puppy. She submitted an application explaining why her dad deserved MJ and kept her fingers crossed.

As the phone call came late one night, Kayti felt like a livewire as she was told by Delaney that Kirk would be the perfect person to love MJ and provide her a loving home.

“When she said she chose my dad, I thought she was lying at first,” Kayti admitted. “When I told my mom and dad that we won, they were so shocked. We were so happy that we got picked. MJ is perfect. We are so grateful and thankful that they chose us.” 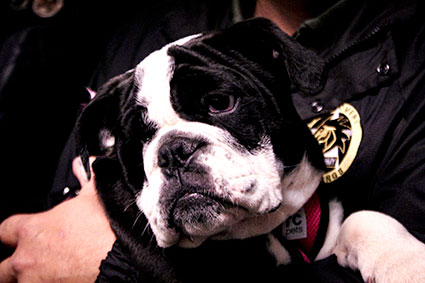 MJ, a bulldog, was recently gifted to First Sgt. Kirk Schultz, a former United States Special Forces veteran inside the American Legion Post 91 in Austin. Schultz was chosen to receive a bulldog from Leah Delaney of Loney Acres in Austin by the American Legion Riders Post 91. Hannah Yang/hannah.yang@austindailyherald.com+

Dogs and veterans have long been coupled as a means of helping soldiers who may be struggling with transitioning from combat to civilian life. After going through traumatic experiences, a canine may be the solid support system that doesn’t hold any reservations or judgment against their owner.

Rather, they’re the comforting presence that could help break through combat-hardened veterans’ demeanor.

Kirk served in the U.S. Special Forces as a Green Beret starting June 1983 and had a 25-year-long military career until he suffered major injuries from breaking his back after taking part in an airborne mission. His service ended in June 2008. Recovering from the trauma was not an easy road. Some days, Kirk felt normal and content with life. The other days, he would sink into depression and struggle to cope with his experiences.

“I’ve had some not-so-good days, and some good days,” he recalled. “I just keep going.”

After being told by Kayti that he would be bringing home a bulldog, Kirk felt himself get excited. The man loved bulldogs for as long as he could remember and had three bulldogs in the past. Seeing MJ through photos, he thought it was uncanny that she resembled closely to one of the dogs they had.

“They looked like they could be sisters from the same litter,” Kirk said. “They’re so silly, and if you’re having a bad day, your bully will be there trying to get you out of that bad day. This is perfect.”

So when it came time to say goodbye to his pal, Naylor—who was MJ’s primary caretaker during the last several weeks—was prepared. Albeit, a little sad, but he was mostly happy that the bulldog will be able to love Kirk and to provide him the loyalty and friendship he needed to cope with his trauma.

There were no regrets or second thoughts about whether MJ would be going home with the right veteran. As soon as Delaney saw Kirk hold the dog, she knew they were meant for each other.

“I saw her give him a kiss, and that’s a good match,” she said. “I have no doubt that she will be a very happy girl. His smile widened when he saw her. They’re the perfect family.”