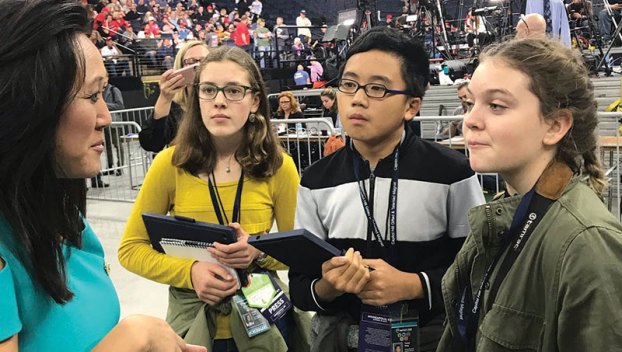 Eighth grader Margot Trout confessed to being “nervio-cited” after learning her teacher had snagged her a student press pass for President Trump’s rally Thursday night in Minneapolis.

The nervousness didn’t stop her, though, as she prepped outside the Target Center.

“I’m here just to have a new experience and be able to kind of get out of my comfort zone and to be around people I might not agree with,” Trout said.

She and fellow students Wren Pexa, Anastasia Wallace and Trump Vang (Yes, his first name is Trump, no connection to the president) were ready for a lesson in American politics Thursday night they’d never find in a textbook.

Teacher Mark Westpfahl encouraged them to get perspectives from Trump supporters and protesters. He said the experience was a powerful civics lesson for his students.

“They’re seeing democracy in action, and it’s not always as pretty and easy as we might make it out in a regular classroom,” Westpfahl said.

The kids soon witnessed a loud political argument. Westpfahl guided them through it, asking the kids what they noticed and whether anyone was actually listening to anyone else during the argument.

“They were just trying to get themselves heard,” Margot said. “They didn’t care about actually having a conversation.”

Westpfahl said the key to shaping something like a political rally into a learning moment is asking his students a lot of questions.

He asked them what they were noticing and how they were feeling about it. He encouraged them to consider other perspectives and narratives and think about what they might not be seeing or considering.

After talking to protesters, the students went inside the Target Center to talk to Trump supporters and waited for the president speak.

This is the seventh time in six years that Westpfahl has secured credentials for his students to hear a president speak, and the third time for Trump.

During a previous visit, one student threw up after hearing the president say things the student disagreed with and heard the crowd boo them in the media pit.

On Thursday, Westpfahl kept checking in with everyone. This time, students seemed excited to be there, especially to see the president in person, he said.

“I have to say, when the president walked up, I almost dropped my iPad,” Margot said. “It was a rush of all sorts of emotions.”

Trump spoke for close to two hours, and after a half day of school and nearly 10 hours of reporting, the students started to fade. They left the speech early, but caught the start of Trump’s criticism of Minnesota DFL U.S. Rep. Ilhan Omar.

Westpfahl made sure to debrief with them right after they left the arena.

“We’re going to see that he does have some accuracies at times. And there’s other times where it’s extremely inaccurate or extremely misleading,” Westpfahl said. “I wish we had more people that would take the time to actively listen and do the research … that’s why I constantly tell you guys in class, be better than adults.”

At moments in the speech, the president used profanity, belittled those he disagreed with, and, according to some interpretations, appeared at one moment to imitate an orgasm when criticizing an opponent.

Westpfahl said some people are surprised to learn he’d bring his students to an event like this. But he insists that this is history and part of the civic process that he wants his students to see.

He also said many of these moments go over his students’ heads. But he keeps a close eye on them and said he encourages the students’ parents to follow up with their kids and help them process the whole experience.

“My hope is that they’re going to be able to see this and all the multiple layers that are behind an event like this rather than just that quick little blurb,” Westpfahl said.

Wren, Anastasia, Trump and Margot said their experience was great.

Wren said at the start she’d been nervous because of the hateful signs she’d seen. Trump was nervous to interview people because that was something he’d never done before.

Later, they said their assumptions were challenged and they felt proud that they’d pushed themselves.

They plan to incorporate as many different perspectives as they can in their reports.

“History is based on perspective. It literally is just perspectives,” said Margot. “If you can start to understand that, then you can get one step closer to understanding more of history.”

Toward the end of the evening she wondered aloud what would it be like if political leaders also had to take civics and history classes.

“Once you understand other people’s perspectives,” she said, “It can kind of change your own.”

China’s trade with US shrinks again in September

BEIJING — China’s trade with the United States fell by double digits again in September amid a tariff war that... read more