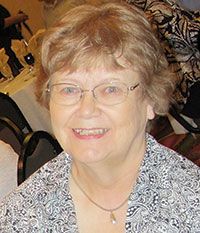 Mary Lou was born Sept. 6, 1943, in Austin, Minnesota, to Nellie and Herbert Hanson. She grew up in Elkton, Minnesota, and graduated from Elkton High School in 1961. Mary Lou then went on to attend Luther College in Decorah, Iowa, and then the University of Minnesota.  In 1969, she married Dennis Schwerdtfeger and they resided in Elkton. They later divorced.

After college and beyond, Mary Lou worked in many roles.  She taught school for a few years, first in Faribault, Minnesota, and then in Downey, California. She worked for the Village of Elkton for many years as city clerk. In the 1980s, she found her passion working with individuals with disabilities, first at the Group Home in Adams, Minnesota, followed by the DAC in Adams, and then as a coordinator for Cardinal of Minnesota in Rochester for 11 years. She retired in 2011.

Her hobbies included reading and working on dollhouses. In her school days she was known for her artistic talent, drawing the Elkton High School mascot the Elk which was on display for many years. She loved playing Julia Child and Roseanne at the Dexter Variety Show. She is a past member of Little Cedar Lutheran Church in Adams, MN and later Dexter United Methodist Church. In December 2016, Mary Lou moved to Cambridge, Minnesota, and later Coon Rapids, Minnesota, to live with her daughter Stefani.

She was preceded in death by her parents; and a brother, David Hanson.

A memorial service will be held at 11 a.m. on Friday, Oct. 4, 2019, at the Dexter United Methodist Church in Dexter with Pastor Jon Marburger officiating.  Visitation will take place at the church one hour prior to the service on Friday.

She was accepted to Mayo Clinic’s anatomical bequest program for medical education, research, and surgical training. Interment of the cremains will be at a later date at the Little Cedar Cemetery, Adams.

Dexter United Methodist Church is assisting the family with arrangements.

David Delane Yerhart, 44, passed away peacefully at his home surrounded by family on Sept. 27, 2019, after his battle... read more