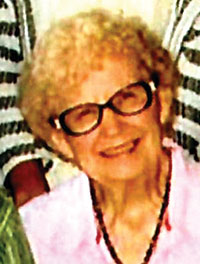 Mary Ann was born on June 20, 1930, in Peterson, Iowa, to Alvin and Clara (Berg) Kruse. She attended Dana College in Blaire, Nebraska, where she received an education to become a teacher. Mary Ann married John L. Munson on Aug. 19, 1951. They lived and raised their six children on a farm in the rural Elkton area. John and Mary Ann celebrated their 68th wedding anniversary in August. The last three years of her life were spent in the Adams Nursing Home. Mary Ann had various jobs that she really enjoyed over the years. She started as an elementary school teacher, was a farm wife, worked for the Selective Service office in Austin, Minnesota, and then later the Social Security Office. Mary Ann finished her work career at the Farmers State Bank in Elkton, working there approximately 18 years. She was always friendly and was able to assist many of her family and friends with her vast work knowledge. Mary Ann was a faithful member of Marshall Lutheran Church in Adams, where she was active in the Ruth Circle, and WELCA. Mary Ann and John were avid golfers. They enjoyed this hobby individually and together and were members of the Cedar River Country Club in Adams. They also enjoyed gardening together. Mary Ann took up oil painting as a hobby later in life, which she thoroughly enjoyed and was able to share many of her accomplishments.

Funeral services will be held at 11 a.m. on Tuesday, Oct. 15, 2019, at Marshall Lutheran Church in rural Adams with the Rev. Jeremy Johnson officiating. Interment will follow in the church cemetery. Visitation will be held from 4-7 p.m. on Monday, Oct. 14, 2019, at the Adams Funeral Home and will continue for one hour prior to the service on Tuesday at the church.