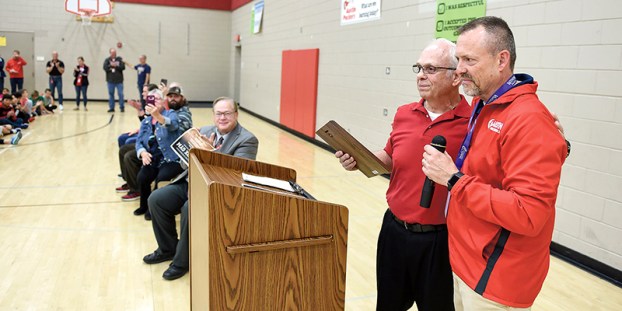 Retired educator and coach Steve Knox, standing next to IJ Holton Intermediate School principal Dewey Schara, was honored during a ceremony unveiling the naming of the school’s gym in his name. Eric Johnson/photodesk@austindailyherald.com

Mr. Knox grew up in Spring Valley, Minnesota, and was the second of seven children.  He moved to Austin in 1973 with his wife and high school sweetheart Julie. 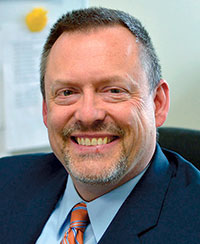 For the next 22 years, Steve taught special education at Ellis Middle School before moving over to Physical Education for another 23 years. During that time, he coached multiple sports at several grade levels, including varsity football, softball, and diving.

In addition to teaching, Mr. Knox was asked to serve as Dean of Students multiple times while at Ellis.  Steve’s final five years of teaching were at I.J. Holton Intermediate School, where he was the first P.E. teacher selected to help start the new school and helped to plan and design the gym and locker rooms.

The idea to name the gym came from Mr. Knox’s colleague at Holton, Rebecca Troop.  Ms. Troop had the privilege of working with Steve during the early years of her career, and she so deeply respected and appreciated his tutelage that she decided Mr. Knox deserved the honor of forever being associated with our school and school district.

She followed the process outlined by our school board and began gathering signatures for a petition.  To be successful, she needed at least 100 signatures.  She secured almost 1,000.  In August of this year, the school board unanimously voted to name the gymnasium at I.J. Holton Knox Gym.

Personally, I had the privilege of working with Mr. Knox for over ten years.  In my first few years of teaching, he provided advice and mentoring.  He once told me, “Work hard, show up every day with a positive attitude, and show that you really care about the kids.”

That has been the formula I’ve used for the past 20 years in education, and it has served me well.  Steve was so widely respected by his peers and students that when we needed someone to fill in as a dean of students, he was the only person considered.  While working with Steve in the office (I was the assistant principal at Ellis during that time), I learned many things from him.  His patience and wisdom were hallmarks of his demeanor.

The dedication was attended by former colleagues, students, and athletes. Attendees whose lives had been impacted by Steve were given the opportunity to congratulate Mr. Knox and share personal stories. Chelsea Brolsma, a language arts teacher at IJ Holton who is a former student and athlete, attributes her career to Mr. Knox as, “His attitude and professionalism continue to influence how I do my job.”

We are incredibly grateful to have been able to honor the legacy of Mr. Knox through this dedication, and we hope it will inspire students for years to come.  As Mr. Knox said during his acceptance speech, “Character Counts every day in Knox Gym.”

Take a stand against bullying at any age

Take a stand against bullying at any age October is National Bullying Prevention Month, and with that comes the opportunity... read more