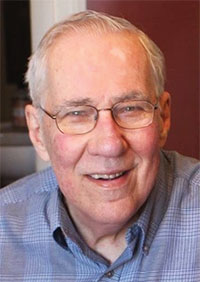 Glenn was born May 15, 1939, in West Allis, Wisconsin, to Herbert and Clara (Olson) Mair. Glenn graduated from West Allis Central High School in 1957. Glenn then attended Luther College in Decorah, Iowa, receiving a degree in business and mathematics in 1961. Following college, he worked for General Mills in Minneapolis, Minnesota, as an accounting specialist. In January 1962 he was drafted into the U.S. Army and served two years at Fort Leavenworth, Kansas. After being honorably discharged in 1964, Glenn returned to General Mills. On May 18, 1963, Glenn was united in marriage to Barbara Elmer in Racine, Wisconsin. Together they were blessed with three sons: Brent, Bruce and Brian. In 1973, he accepted the administrator position at St. Olaf Lutheran Church in Austin. In 1980, Glenn became the administrator at St. Mark’s Lutheran Nursing Home, retiring in 1998. Glenn enjoyed many sports, including golf, basketball and softball. He also pitched for his St. Olaf Lutheran Church’s softball team. He continued his love of sports through coaching his sons’ football, basketball and baseball teams. Glenn was a member of St. Olaf Lutheran Church, a past Rotary member, Austin Area Foundation board member, YMCA board member, and served on the Austin Planning Commission and with Mower Council for the Handicapped. His greatest joy was spending time with family, especially his grandchildren.

Memorial services will be held at 11 a.m. on Saturday, Oct. 26, 2019, at St. Olaf Lutheran Church. Visitation will be held one hour prior to the service on Saturday at the church. In lieu of flowers, please send memorials to the St. Olaf Building Fund or recipient of donor’s choice. Services are prearranged and performed with Worlein Funeral Home of Austin. Condolences may be expressed to the family online at www.worlein.com.