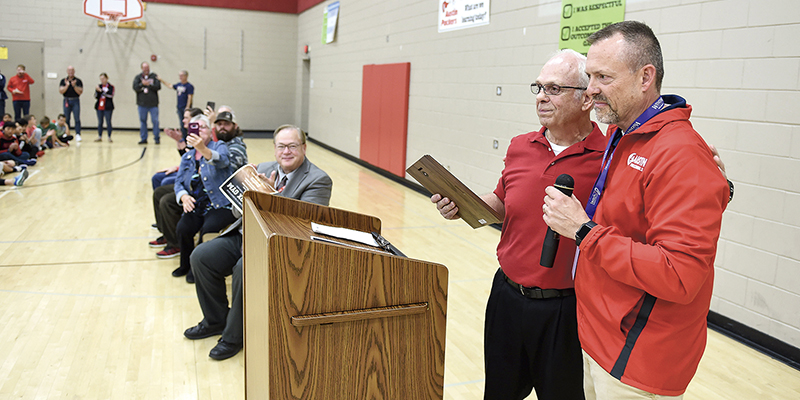 Retired educator and coach Steve Knox, standing next to IJ Holton Intermediate School principal Dewey Schara, was honored during a ceremony unveiling the naming of the school’s gym in his name. Eric Johnson/photodesk@austindailyherald.com

Amid a large crowd of friends, family, staff and community members, Steve Knox sat  with a big smile on his face. The longtime Austin Public Schools gym teacher and coach, was immortalized by having IJ Holton Intermediate School’s gymnasium dedicated to him on Friday afternoon.

A well-known educator for APS over four decades. Knox is known as a teacher, friend and coach in football, swimming, softball and basketball to thousands of students and families who have had him for a class. It wasn’t a difficult decision at all for the community to rally behind a petition to have the IJ Holton gym to be dedicated and renamed as Knox Gym as a way to preserve his legacy.

During Friday’s assembly, students and staff along with Knox’s family, friends and former coworkers, celebrated Knox on his 45 years spent teaching and coaching at APS and presenting him with a plaque that honored the dedication, as well as unveiling a large banner that declared the space “Knox Gym.” 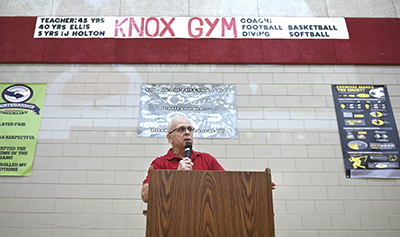 Austin educator and coach Steve Knox addresses the IJ Intermediate School student body, staff and visitors during a ceremony Friday afternoon where the gym was officially named for him. Eric Johnson/photodesk@austindailyherald.com

Superintendent David Krenz told attendees that the process for naming a building or structure after someone worthy enough to be remembered started with IJ Holton physical education teacher Rebecca Troops, who organized a petition that received more than 1,000 signatures from community members expressing support for the dedication.

Troops, who was a former student and colleague to Knox, learned everything she could about being a good teacher from her mentor.

“Mr. Knox helped me be a better teacher and a better person,” Troops told the room. “What really meant a lot to me was his work ethic and that he always cared about the kids. I always knew when you’d come to class that you’d have fun. Don’t be afraid to try something new. Change is hard and scary sometimes … but Mr. Knox embraced that challenge … learn as much as you can from that person you looked up to.”

There were others who spoke in their working relationship and friendship over the years at APS, including IJ Holton Principal Dewey Schara who was a third-year teacher at Ellis when he got a chance to work with Knox who was a veteran teacher. 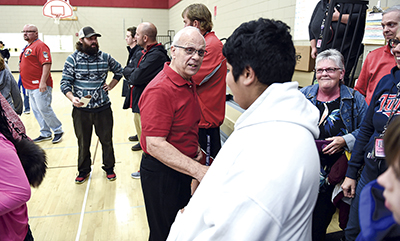 Steve Knox talks to an IJ Holton Intermediate School student after the studen congratulated him Friday afternoon before the ceremony honoring Knox with the naming of the school’s gym in his honor. Eric Johnson/photodesk@austindailyherald.com

“I was super nervous as a new teacher,” Schara told students. “Mr. Knox, as that veteran teacher told me ‘Listen, young man. Work really hard and care about the kids, and you will be very successful.’ I’ve always carried that at the front of my mind ever since.  Mr. Knox, thank you.”

Over the course of 20 years, Schara viewed Knox as a mentor, colleague and friend. He held deep gratitude toward Knox who taught his own children, one of which is on the autism spectrum, to be more confident during gym class.

“He watched out for him,” Schara said. “I can tell you dozens of stories like this from former colleagues, students and parents … he has touched literally thousands of students’ lives and all of them will tell you that Mr. Knox cared.”

Knox, who sat in front of the large crowd of people who loved him, tried hard to conceal his smile, but it was clear that this moment touched his heart deeply.

Former students of Knox, some who became teachers themselves at APS, also shared testimonies in tribute to their beloved gym teacher. They lined up and shared when they had Knox while as a student, and some shared their coaching experiences with Knox. Some who couldn’t make it to the assembly, even submitted a video wishing Knox well and congratulating him on the dedication, praising his impact on students.

Whether Knox deserved the immense honor of having his legacy preserved in this manner, Schara said it was a “no brainer.”

“The gymnasium in the most beautiful school in the state should be named after its first P.E. teacher and a teacher who is a legend,” Schara said. “There is no secret why he was chosen to come here; he is the foundation for physical education that you want to build your school around. I don’t think any other name would have even been considered. Naming the gym after him is a no-brainer.” 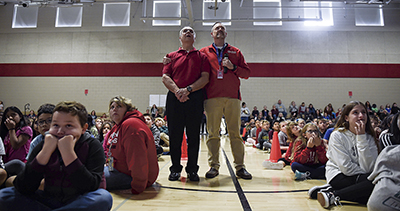 While 855 IJ Holton students cheered for Knox, the man walked across the gym floor and took his turn at the podium. With a big smile, he wanted to share his gratitude to the district he gave much of his life and love.

“Teaching has always been special to me,” Knox said. “I always got up in the morning, excited to go to work in this gym for fun and educational opportunities.