David Delane Yerhart, 44, of Lyle, Minnesota, passed away peacefully at his home surrounded by family on Sept. 27, 2019 after his battle with brain cancer. 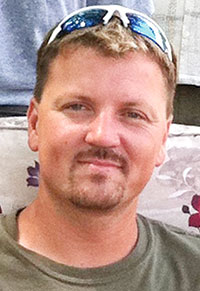 Dave was born in Austin, Minnesota, on Feb. 17, 1975 to David Yerhart and Tammy Wytaske. On July 17, 1999, Dave married the love of his life, Keri Johnson, and they made their home in Austin with their son Nick. In June of 1998, they had their daughter, Alishya and later moved into their current residence (their dream home) near Lyle in 2003.

Dave graduated from Hayfield High School in 1993, and obtained an associate degree in advertising from Brown Institute in 1997. David was employed by McNelius Trucking Company and a former local trash removal company prior to opening his own business, Y Waste Removal in 2009.

Dave was a well-known member of the business community and recently won the Austin Daily Herald’s “Best of Mower County-Garbage Hauler” award. Dave was a very generous man and was always taking advantage of opportunities to give back to the community. He was a significant advocate for the Lyle Area Cancer Auction and collected “Cans for Cancer” that he donated for the cause.

Dave was also involved with the “Pay It Forward” organization donating free trash removal. This was very important to him. Always seeking ways to help others — it is what he always did. Dave was a member of the Austin Chamber of Commerce and the Mower County CEO Program. Dave was also a notable supporter of the Austin Bruins Hockey Team where his love for hockey, supporting the community, and special gift of sponsoring players was evident.

As a very motivated man, Dave enjoyed a lot of things: hunting, fishing, drawing, photography, and racing anything with wheels and a motor. He was an avid 4-wheeler and enjoyed mechanics and working with his hands. Some of Dave’s favorite memories include the annual Yerkrumjo Family Vacation at French Lake, Crabby Christmas, and spending time with family and friends.

A Memorial service will be held at 2 p.m. on Thursday, Oct. 3, at First United Methodist Church with the Rev. Donna Dempewolf officiating. Visitation will be at Clasen-Jordan Mortuary at 4-8 p.m., on Wednesday.

In lieu of flowers please send memorials to the family to assist with medical expenses.