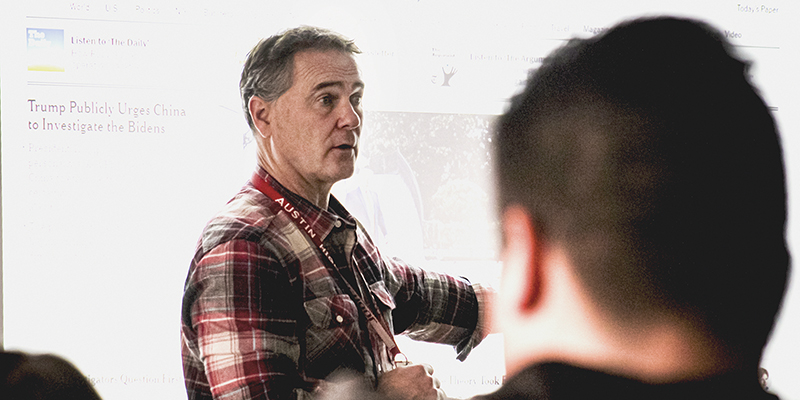 Rayce Hardy, a government teacher at Austin High School, tries to incorporate current events into his classes. With the recent impeachment inquiry, Hardy believed that the best way for students to learn about government was to use real world examples. Hannah Yang/hannah.yang@austindailyherald.com

As headlines appeared on various websites and news sources about the ongoing impeachment inquiry over President Donald Trump’s phone call with Ukraine, teachers at Austin High School and Pacelli High School are finding themselves in a unique position to educate their students about a rare government process unfolding in real time.

These types of lessons are different. There are no pre-written assignments or chapters in history books that a student can study and understand the outcome of a specific war or conflict. The impeachment inquiry was different for teachers, as there’s no way of determining what the outcome of this current event will be since the conclusion hasn’t come yet.

Rayce Hardy, an AHS government teacher and economics instructor at Riverland Community College, usually goes through different methods of engaging his students on the issues that unfold around the world, including the ongoing impeachment inquiry against President Donald Trump over his phone call to Ukraine for political and personal gain.

This could be the first time in history when a sitting president who is up for re-election faces an impeachment inquiry.

“I had my students read the Hobbs Act and the federal election law,” Hardy said. “As soon as I ask them to think of a current event that’s happening where the Hobbs Act and federal laws could be violated, they soon came to realize that the impeachment inquiry could fit within the Hobbs Act perfectly. There were clear cut violations.”

The Hobbs Act prohibits the actual or attempted robbery or extortion affecting interstate or foreign commerce in any way or degree.

Seeing an impeachment inquiry happen during Trump’s first term is highly unusual, Hardy said, but not completely unexpected. From the beginning of the president’s term, Hardy knew that there was something different about Trump’s approach to politics and leadership, as well as reactions to criticism.

“From his reactions to various things, I told my buddy the day after Trump was elected that I’d be surprised if he makes it past three years into his first term without an impeachment inquiry,” Hardy recounted. “I thought he was going to end up getting himself in trouble. In modern times, how was he not going to?”

The impeachment inquiry is the early start of the impeachment process, where Congress forms committees to acquire as many facts and evidence as possible that would determine whether the president’s offenses would result in the House of Representatives to majority vote in support of impeachment.

That does not mean instant removal from office, said Greg Gentle, Pacelli High School government teacher, as impeachment is defined as leveling the charges against the president and is similar to an indictment.

“It’s really difficult to say,” he said. “I wouldn’t be surprised if the House impeached the president, but I would be surprised if the Senate decides to remove him. The possible outcome is likely that the decision will be divided, and currently, there aren’t enough Republicans who support impeachment enough to lean toward that outcome.”

To adequately teach his students about the government processes, he felt that by incorporating the impeachment inquiry from current day into his lesson plans, would allow for more robust dialogue, as well as seeing how government works.

“The best way to learn, is to see it happening in real life,” Gentle said. “I think that’s the best way to teach how a government works by seeing it happen in front of them.” 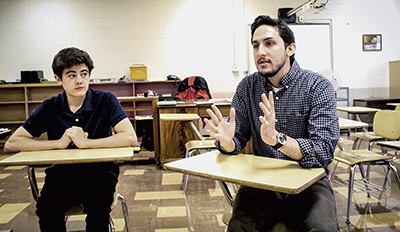 Carter King, a Pacelli High School senior (left), and Greg Gentle, a Pacelli government teacher, shared their perspectives on the ongoing impeachment inquiry against President Donald Trump, and how the subject is approached in class. Hannah Yang/hannah.yang@austindailyherald.com

A rare, but dangerous process

For some, impeachment proceedings seem like a simple process of removing a president from office. However, the implications of pursuing impeachment are much more severe.

House Speaker Nancy Pelosi, who up until recently, was against impeachment without clear evidence that Trump violated federal laws and faced intense criticism by her own party.

However, there was a lot to win and a lot to lose from a premature investigation. Gentle said that if the House moved forward without any additional evidence to impeach and ultimately fail, then support could collapse with constituents depending on how their representative viewed the proceedings.

Regardless of whether the House was successful in impeaching Trump, it’s another matter entirely for him to be removed from office. In order for the president to be taken out of his position, the Senate needs to vote two-thirds majority in support to remove Trump.

With the way parties have been refusing to go across the aisles, it is unlikely that Trump could be removed from office even if he was impeached by the House. The act of impeachment is rare, and has only happened twice in American history: Former President Andrew Johnson in 1868 and former President Bill Clinton in 1998. Both were impeached, but were acquitted in the Senate. Former President Richard Nixon could  have faced possible impeachment, but ended up resigning and remains the only president to have quit his position.

It’s because of the need to protect the balance of power in government that the framers made it very difficult to impeach and unreasonably remove the president.

“We don’t want Congress to all of the sudden attempt to remove the president because they don’t like him based on party ideology or personal reasons,” Gentle said. “There is a legitimate reason why impeachment does not happen that often. We’re in a time when opinion is fact, and more politicians are toeing party lines. We are seeing less and less people willing to meet in the middle and compromise.”

There was concern over whether regular citizens could accept the outcome of the impeachment process, as Hardy viewed the increasing partisanship in both parties grew too divided to come together objectively.

“There are crybabies in both the Democratic and Republican parties,” he said firmly. “With leadership having this ‘eye for an eye’ mentality, it’s so sad to think that nothing is getting done because no one is willing to compromise and work together for the American people. When something happens, the other party wants to pull a double standard. It’s just mind boggling to me.”

Learning about the impeachment process, questions were raised by some students as to whether the process actually serves to benefit the American people, or if it served more selfish purposes for political parties. Carter King, a Pacelli senior, knew little about the impeachment inquiry and felt mixed about the ongoing process. King felt unsure as to whether Trump should be impeached and removed from office on the current information available.

“I would like to believe that our government works,” King said. “I hope that these decisions are made objectively and with the presented facts and evidence. I guess I don’t have all the information yet to make up my mind. I hope that parties vote through a neutral lens and do what’s right for the country.”

Other students also expressed their mixed feelings about the impeachment inquiry, including Xavier Heil, an AHS senior and Aleks Brown, also an AHS senior. However, learning about the event as it’s happening in real-time gave more of an educational opportunity than reading something out of a textbook.

“I guess what I learned is expect the unexpected,” Heil said. “I like that Mr. Hardy can actually relate parts of his own life to what’s going on in the world.”

Brown agreed, but was also mixed on whether an impeachment inquiry would eventually result in Trump being removed from office. She noted that from what she’s learning in class about the divided parties and the party dominated governmental bodies, she was not too certain that it’d be successful.

“I feel like it’s good to be in the loop and know what’s going on,” Brown said. “I have a better understanding now. But, it’s really hard to say whether the president will end up impeached or not. I guess we’ll wait and see.”

An era of ‘fake news’ and opinion as fact, how teachers navigate the landscape

During the last few years, teaching students about current events and viewing historical through factually sound pieces of information even became more challenging.

While attempting to teach the students about the impeachment inquiry, Hardy found himself encountering a disconnect from students about what they’re learning in class. There were even moments during the last few years, when Hardy found himself dismissed by his own students regarding what they perceived to be true through their biases and leanings. Soon, Hardy heard from fellow colleagues that they also experienced something similar from their own students.

“I had a student who was sharing a completely false story with his classmates for a presentation,” he recalled. “I talked to him after class, letting him know that the story he chose was 100 percent false and that info was from one of those extreme websites. He didn’t care. He didn’t care that he was intentionally deceiving his classmates, and that’s something I never experienced before in the 29 years I’ve been a teacher. Many of them, are getting this information from their parents who are obsessed with stories that confirm their beliefs. It was almost a clan-like mentality.”

There was also a growing concern regarding the dismissiveness that students have started showing toward pieces of information they felt did not conform to their views and didn’t believe them to be true.

“I’ve seen this at the college too,” Hardy said. “As teachers, we cannot jump to conclusions, which is easy to do, but we need to make sure we can tell the difference between fact and opinion.”

As a teacher navigating the landscape of partisanship and toxic rhetoric, Hardy felt that it was important as an educator to try and bring students into a space where they can get access to information in a neutral setting, as well as asking questions. After encountering growing disconnect between students and the headlines they’re reading, Hardy wasn’t ready to give up.

“One person’s lack of empathy doesn’t supercede everyone else’s empathy toward something,” he said. “Your situation may be isolated, but not collective on people. I am worried about what students are learning, but I’m trying my best to inform them, and get them to care about what’s happening around them.”