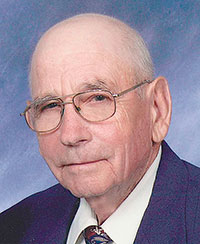 Walter Andrew was born March 23, 1923, at home in Elko, Minnesota, to George and Margaret (Luckert) Smith. He was the youngest child of eight with four sisters and three brothers. Walter attended Elko School through the eighth grade and Farmington for his freshmen year. His sophomore year was at New Prague, Minnesota and his junior and senior years were at Lakeville, Minnesota.

After graduation, he helped on the farm with his family and then he and his brother went to California and worked for six months in the shipyards. He returned home and worked on the family farm until it was sold in 1948. Before moving to Austin, he worked a short time at Cargill. In 1950, he came to Austin to teach accordion for the Traficante Accordion School for one year. He then worked for Sterling Builders until 1960, at which time his co-worker and friend Gayler Jensen and Walter went in partnership to build houses in Austin. It was known as “Smith & Jensen.”

In 1968, they both went to work for Joseph Construction until their retirement. Walter was an excellent carpenter and handyman and could fix anything. If he couldn’t buy what he needed, he would design and make it himself. Walter was always willing to help friends and family when necessary and a lot of people enjoyed the fruits of his labor in gardening.

He married I. Darlene Cooper on Sept. 28, 1952, at the First United Methodist Church in Osage, Iowa. They made their home in Austin and were married for 64 years. Walter enjoyed playing the accordion and old time music, bowling, gardening, flowers, and golfing. In fact, he played golf until 90 years young.