The Wide Angle: Prepared starts with the pen

I enjoy going to Southgate Elementary. I like talking to Cheryl Howard at the front desk when I walk in, I enjoy bugging Katie Baskin about letting me on a roof (that’s an inside joke and quite frankly she’s the only one that will get that) and it’s just a nice building to be in.

Not that I don’t enjoy going to all the schools in Austin. The staffs in all of them are quality — so I suppose the above paragraph doesn’t do much other than allow me to name drop.

But there is a reason I bring them up. Southgate is where I went for pictures on the first day of school Tuesday. There was no rhyme or reason really, it’s just the school I picked.

It’s a tradition in probably every small newspaper that schools are visited by a photographer for those first-day photos: pictures of parents in turn taking photos of their kids in front of lockers, teachers hugging students and students investigating the digs.

It’s generally a fun assignment as the excitement is high and even I can attest that there was a certain excitement. The new school year marks the ramping up of activities to cover and it’s always good to familiarize one’s self with the schools.

If only I had prepared myself. 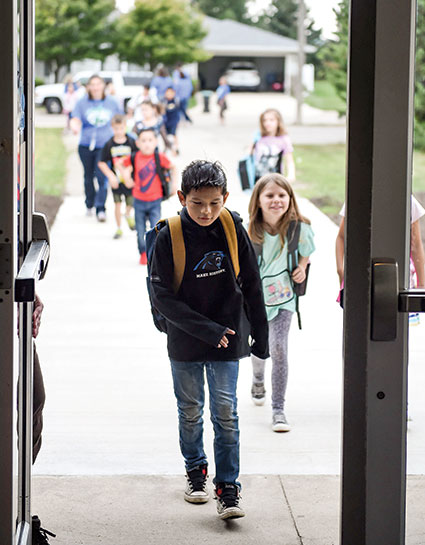 These Southgate Elementary students are far more prepared than I ever was for school. Herald file photo

As students began filling their lockers and getting their breakfast, which was a far better meal than my … coffee, I began to marvel and respect how much work it takes getting these young minds ready for the school year. Notebooks, pens, pencils, calculators —  all tucked into lockers, waiting to be used.

I wandered these halls taking it all in. I swung into Traci Braaten’s room because … well, I know Traci … and much like my dad, I find it hard to leave when there is good conversation to be had.

I talked with Traci and a couple other teachers for a bit, one of which I’m pretty sure I covered in Grand Meadow during volleyball season, which makes me feel old. If I’m wrong about this teacher … then I still feel old.

After distracting them from what I’m sure was far more important, I went about taking more pictures, not realizing that I would be returning, apparently because I didn’t prepare all that well.

As I was about to get a name I realized I had no pen or pencil. There are three things a journalist should always have and they include a writing utensil, notebook and coffee. I made up the third one, but that should be taught in college.

And I failed the first of these. I went back to Traci … because I know Traci. Being a qualified teacher, certified by the State of Minnesota, she was able to loan me a pen and even said I could keep it.

What Traci doesn’t know is I promptly lost it.

Still, it was pretty fun watching the kiddos wander the halls for a new school year. It reminded me a bit of when I was going to school, an appallingly long time ago.

Not much though, because nothing really stands out. I was at the school all the time, the effects of having two parents for teachers.

I was always following them, and I would often get the opportunity to shoot baskets in a gym all to myself as they got the work done they needed.

It’s baffling I guess why I wasn’t a better basketball player. I have a hard time believing that my scrawny, double-digit pound self couldn’t’ have been an NBA player.