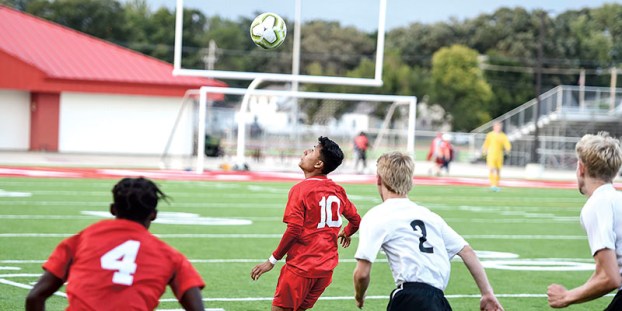 Austin’s Julio Hernandez finds the ball during the first half against Winona Thursday night at Art Hass Stadium. Eric Johnson/photodesk@austindailyherald.com

The Packers flooded Winona with a vast amount of attacks as five separate players scored in a 5-0 win in Art Hass Stadium Thursday.

Austin (3-1 overall, 3-0 Big Nine) hurled 24 shots at Winona keeper Hans Larsen, who made some big saves before the Packers scored three times in the final 11 minutes to ice the game.

“We came out with players playing their positions the way their supposed to play their positions,” Austin head coach Jens Levisen said. “The midfielders were getting back, defenders were communicating with midfielders and the forwards weren’t giving them much room to breathe. The guys were comfortable playing their passes. We were moving the ball and it doesn’t matter who scores. We’re starting to get into that rhythm.” 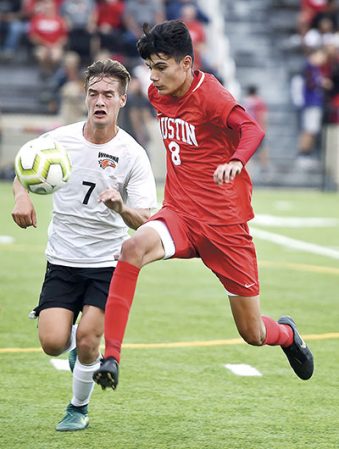 Austin took the lead early on when Julio Hernandez scored a breakaway goal off a pass from Henry Tolbert with 26:46 left in the first half and Keh Reh scored on a put back just one minute later to make it 2-0.

Elisha Simerson scored on a header from Jose Vallardes, Dylan Hanegraaf scored on a pass from Hernandez and Gadisa Birhhanu scored on an assist from Tolbert in the second half.

While he didn’t score a single goal, Tolbert’s explosiveness helped the Packers stay on the run throughout the night.

Simerson said the Packers are starting to find their mark after beating Albert Lea 6-0 earlier this week.

“Tonight was really fun. We were coming off a nice win in Albert Lea, where we were connecting really well,” Simerson said. “The defense did a great job tonight and so did the offense. You can tell in practice and in games how much of a difference Henry makes. He’s just a force to be reckoned with. I think he’s the best player in this state by far.”

Reh is one of many Packers to embrace a much bigger role this season and he has shown some big leadership abilities this week. After sustaining a cut to the face while being knocked to the ground last week, Reh hasn’t missed a beat as he’s been making plays this week for the Packers. He still has a mark on his face from the fall, but he’s kept his focus on the field.

“I got it fixed and I just had to get back to practice,” Reh said. “I’m playing in the middle this year so I’m getting a lot more touches. Last year I was on the outside and it was harder for me to get comfortable.” 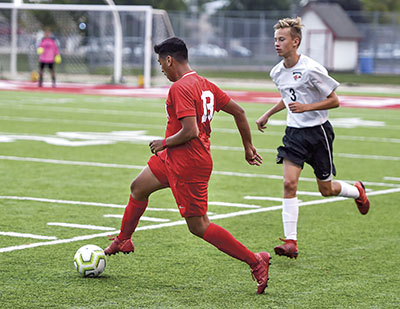 Austin’s Sunny Mehta plays the ball against Winona during the first half at Art Hass Stadium Thursday night. Eric Johnson/photodesk@austindailyherald.com

Austin’s depth seemed to give it an advantage down the stretch and that’s a strength that Levisen likes about his squad this season.

“We’ve got a tremendous amount of depth,” Levisen said. “We’ve got guys that come off the bench and we don’t miss a beat. We’ve got lots of guys that can show up to play and they play hard.”