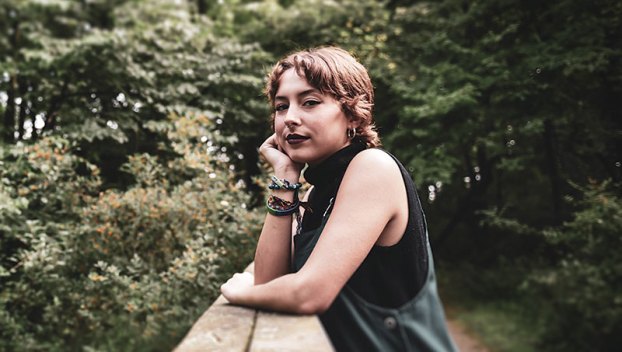 Lilla Parada hopes that in the end people will feel emotion when listening to her music. Parada has recently released her first album “Poor You.” Photos by Eric Johnson/photodesk@austindailyherald.com

Soundtrack: Lilla Parada has released her first album, hoping it will be the music people need

Lilla Parada doesn’t want you to be sad, but she does want to be the soundtrack for those days you are sad.

The concept of sadness is a common theme winding through the five-song EP “Poor You,” which the 19-year-old just released this year. Indeed, it was a goal from the very start when the Austin graduate was beginning the grueling process of self-release.

“I just want something for people to be sad to,” she confessed on an ironically cloudy morning in July. “I never felt there was an album I could listen to and be like, ‘I’m having a bad day so I’ll put this album on and listen to it through, and be sad through the whole thing.’ I wanted to create that for my friends and family so they could have what I didn’t have when I needed it.”

At the same time, she also confesses that some of her closest fans would like something a little more upbeat.

The album is a transition point of a sort for Parada, a place between two worlds that mark the end of one journey and the start of another.

She graduated from Austin High School in 2018 and this fall will move to the southeastern United States where she will attend the University of Arizona in Tucson.

“Hopefully, once I get there it will become less Lilla as an individual artist and more finding people to make a band, create more music, play actual shows. Play my album and get it in the chain of music. There’s a great music scene (in Tuscan). I’m very excited.” 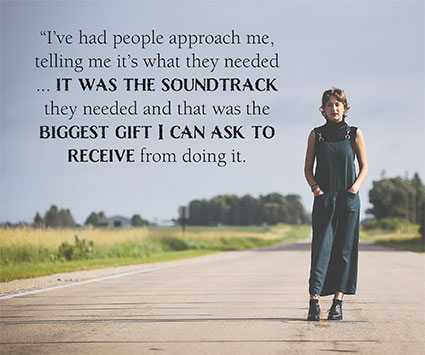 Parada is part of the norm in her family. Of five children, four have taken to the world of music, with only one showing talent elsewhere ­— in soccer.

An older brother, Matias Parada, was a stand-out for the Austin boys soccer team. Other than that, it’s all been about the music.

“All of my brothers, except for Matias — he got the sports gene. Everybody else is very musical,” she said. “They’ve all been big helps with getting me into guitar and writing my music and if I ever wanted the opportunity to play my own show, I was given that opportunity where I could go play my music.”

Her serious dive into music began at the mature age of eight when she started writing songs, in large part pushed by her older brother Andy, who has been the guiding hand in her music throughout the process.

Her subject matter was surprisingly mature for the age. 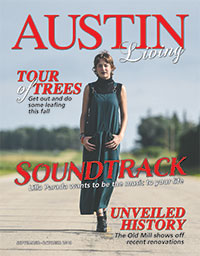 Pick up your copy of the September-October edition of Austin Living Magazine for this story including so much more.

“When I was like eight, my brother told me, ‘if you write your own songs you can play at a show,’” Parada remembered. “I don’t know why, when I was in fifth grade, I was writing songs about heartbreak already and then it became less so …”

Songs in those days were done to the backdrop of a ukulele Parada played, but it quickly progressed from there, Andy pushing her the entire way.

Once her family moved to Austin, Parada said her next big influence came from now-retired choral director Brian Johnson.

For many who went through the music program at AHS, the popular choir director is routinely cited as a main influence in later music careers. For Parada, it was no less so.

“Once I got here, Mr. Johnson was a huge inspiration to me,” Parada said. “That was a big turning point because for so long people have told me, ‘you should go into music’ and I felt that I had heard that suggestion from so many people, it should be different for me.”

That growing passion reached through high school programs such as Austinaires as well as in theater which, in turn, continued through to plays on the Riverland Community College stage.

It was during these later days that she began toying with the idea of making an album, which really took hold her senior year.

Through a year of hemming and hawing, debating the merits of the work that lay ahead and with no small amount of urging from Andy, Parada finally made the decision to plunge into her debut album.

Local artist Jaiden Schuster did the cover art for “Poor You” and for Parada it was a moment of clarity. “Wow, it’s going to happen.”
The album can be found on Spotify, SoundCloud and Apple Music

‘Did you record your album?’

In his own way, Andy was the driving force in getting her to record her album — by way of Christmas gifts.

For years, Andy not-so-subtly kept poking Parada towards the album.

“For every Christmas he would buy me one more piece of recording equipment so by the end I had no excuse,” Parada said. “I was totally set up.”

However, before all the pieces were assembled, Parada was dealing with doubt in the process. At the beginning of her senior year, Parada released “Lost and Found,” to iTunes and then — just stopped.

“After that I just came to a halt,” she confided. “People kept telling me to write an album, but I was just, ‘it’s so much work and it’s time consuming.’”

“I think a big thing was people telling me to do it and my thought process was ‘well, I’m just another person to do it.’ There’s no difference if I’m the thousandth person to do something like this.”

“He would call me every week, ‘Did you record your album? You just need to call people and do this … and do it.’”

By the end of senior year, the writing of Parada’s own hand was on the wall. She had accumulated enough songs for an album and she owned up to the very real fact that she had run out of excuses.

Not that it was easy. It’s never easy.

Parada’s own process included writing, recording and no small amount of discarding and starting over.

“A lot of time recording parts of the song and not liking it and starting over,” Parada said. “Months of rerecording, working around different songs and stuff like that.”

For mixing and mastering purposes, Parada called in the help of rap artist and friend Woodro. She also got help with backing music from another friend from Austin, Owen Culbert.

When it was all done, Parada was finally able to sit back and truly see what she had done, but it was two points in particular that brought the whole experience home and introduced a strong sense of reality.

“I guess it was after, when I sent everything and it was out of my hands waiting for it to be released,” she said. “Now there’s no stopping it. People are going to hear it.” 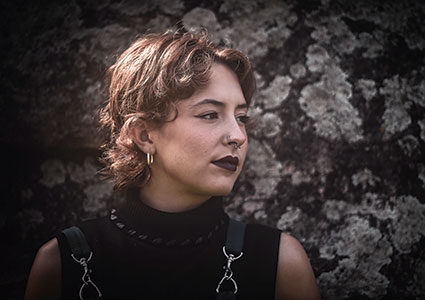 Lilla Parada has released her first album, hoping it will
be the music people need.

Like any aspiring artist, Parada admits she had stars in her eyes. The idea of being a music star held strong appeal for her as it does for so many.

But starting from this point, without big record deals and wide exposure, the process is daunting. As time progressed, however, it became more about the music than it did the big stage.

“I think it’s always been like that. Just performing for my older brother’s friends. ‘Oh, I’ll be a star and that led me to acting and being on stage,’” Parada said. “It kind of started as that, but slowly it dissolved into, ‘I’m making music and it’s personal to me and it means something to me and it’s good enough.’”

Parada wants to connect the music she makes to emotion, a driving force in her process of making music.

That equates into wanting her music to mean something to somebody.

“I’ve had people approach me, telling me it’s what they needed,” she said. “They’ve been going through something so difficult and it was something they needed to hear and it was the soundtrack they needed and that was the biggest gift I can ask to receive from doing it. Emotions are so important. We don’t feel them enough that when you find the right soundtrack to whatever emotion you’re feeling, it can really help you take that in depth and learn more about yourself.”

Thank you to those who were able to celebrate with us at our recent 10-year anniversary party in honor of... read more