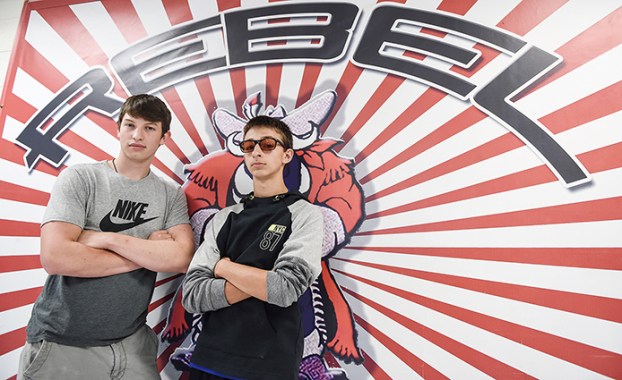 Southland students Josh Mullenbach, left, and Cam Ruechel are both color blind and are currently making use of special glasses that allow them to see colors. Ruechel is wearing the glasses for use indoors. Eric Johnson/photodesk@austindailyherald.com

When Heather Knutson noticed a student in a biology class using the wrong colors for one of his assignments last year, she had a conversation with the sophomore and was told some shocking news—the student was color blind.

“He looked and felt almost embarrassed by it,” the Southland paraprofessional  said. “It was something that took me off guard, and I haven’t forgotten it since.”

After her encounter, Knutson wondered if there were other students who may have been struggling with the same problem and found that there were indeed a portion of the student population who were challenged with color vision deficiency (CVD). About 11 students in Southland School District were confirmed to have a form of CVD. Five attend Southland Middle/High School, one is a student at Sacred Heart Catholic School, four are enrolled at Southland Elementary School in Rose Creek, and one is suspected to have CVD.

One of those students included Josh Mullenbach, a Southland High School senior, who is unable to process specific colors visually, making it difficult to differentiate and see the differences between colors. For some, reds, greens and browns could look similar, causing some challenges for those who need to be able to see specific colors to perform various tasks.

Mullenbach knows what it was like to experience CVD and not have many people realize how frustrating it is to be able to work through a world that is more catered to people without CVD. Students in robotics could struggle to see reds, blues and greens when performing a game, while those in FFA who use color-coded materials may not be able to be as successful because of their CVD.

“If I went golfing, I couldn’t see the tee because it was red,” Mullenbach said. “I wouldn’t be able to track the deer while out hunting. Hunting in ag communities is a huge thing, and it’s very difficult to do that when you have trouble seeing blues and purples. It’s something that I think people definitely take for granted. Living with it is kind of like seeing in camouflage. That’s the best way to describe what it’s like. The colors blend together.”

Knowing how much it could affect a student’s ability to succeed, Knutson led the charge in bringing Enchroma glasses to Southland Schools District. She researched the types of tools that could help students with CVD and approached former superintendent Jeff Sampson to help with writing grants to secure funding.

His willingness to support the initiative was also personal, Knutson said.

“Mr. Sampson has a form of CVD,” she said. “His wife told me that he would wear the same colored suits, and she would label which colors they were so he wouldn’t have to worry about matching outfits. Mr. Sampson also told me that when he was in school, students with CVD would wear the same color shots and shirts like blacks, greys and whites, so that they wouldn’t have to worry about color coordinating outfits. It’s just something else we never think about because we don’t have CVD.”

The Southland School district has invested in special glasses that allows those students who are color blind to see in color. Eric Johnson/photodesk@austindailyherald.com

Enchroma glasses are based on an advanced light filtration technology that allows certain colors to become more distinct on a visible spectrum. The lenses refine the light before reaching the eye, which can receive color information they need to communicate correct signals to the brain.

Thanks to funds provided by the Adams Lions Club and the Rebel Nation, Southland purchased the glasses for $269 per pair, and six were delivered last week to the district. Students who need them for specific classes and extracurriculars are able to check them out and use them for activities and assignments.

“This is one bit that we can do to help people with this,” Knutson said. “The goal for me personally was to put something together and expose this issue to other schools, and give some kind of exposure for this kind of problem that exists.”

Students typically get tested for any visual or auditory deficiencies by the time they get to the fourth grade. Testing for CVD usually involves something called a polka-dot test, where a number plotted on paper in colored dots is visible to those without the deficiency.

This type of testing has been the only testing that existed for discovering if a student had a color vision deficiency or blindness, and it’s far from the perfect method of determining whether someone has a deficiency or not.

“If there’s a student who struggles with dyslexia or another type of learning disorder, then they might not be able to identify specific numbers, and on top of that, with a color vision deficiency?” Knutson said. “Is this method for detecting color deficiency accurate? Is this the only test that needs to change? Maybe changing the outline to a shape different from numbers can accurately tell us if their ability to see colors is misinterpreted.”

Southland School District is only one of two public school districts in the United States that have purchased Enchroma glasses to help students with CVD.  Knutson said that it was also the only district in Minnesota that has an accessible  supply of glasses.

Though it seems shocking to see a low number of districts with this type of resource, it wasn’t a surprise to Knutson, who said that CVD isn’t something that is taken as seriously as other types of visual impairments. Many students she spoke with said that they just “dealt with it.”

“People have always just dealt with it,” she said. “It’s our job in public education to not just deal with it. Our goal is to accurately diagnose kids earlier more correctly, and help them in the entirety of their school career and ability to see in color. With this pilot program, I spoke with Enchroma to see how we could get this in other schools, and encourage them to utilize this as a tool.”

Knutson hopes that exposing Minnesota to the need of accommodating students with CVD will help change policies and test formats that currently make it difficult for those who have CVD to succeed. She recounted a case in Virginia, where a student with CVD was put in a special education class because he failed his standardized test when the questions were written in colors he could not identify. The student’s mother approached the state department and testing was changed so that the words could only be written in black and white.

“It’s something we take for granted,” Knutson said. “I landscape during the summer, and made more observations in my summer job learning about the daily life of kids outside of school. I am basing my experiences on my role as a paraprofessional to help kids. There is more to life outside of these walls, and it’s pretty overwhelming to think about for the kids with CVD. It’s an issue that always existed, but more exposure means more are aware.”

The first big test on whether the Southland district will benefit from the glasses will be during their first round of standardized tests. Some students may have difficulty identifying portions of the test where colors could essentially be the difference between pass or fail.

Enchroma, the company that makes the glasses, has only been around since 2011, so there is limited data available in regards to how this type of technology affects public schools. Knutson said that because Southland is one of two districts purchasing the glasses, the company reached out to perform research on the benefits of public schools utilizing the technology. For this, Enchroma sent four outdoor pairs of Enchroma glasses to Southland to use and gather information.

“We would see where kids use them, and for what classes outside of just art class,” Knutson said. “One student said they needed it in woods class to be able to identify different tones for a test. There’s just so many little things that we never even thought of for usage, it’s crazy.”

The hope is that students can take some of the outdoor Enchroma glasses home to use for a weekend. For students old enough to hunt, Knutson said they could possibly have a chance to test out the glasses to help track animals during those excursions.

Cam Ruechel, a freshman at Southland High School, struggles to differentiate shades of blues, purples, greens and browns. He describes the experience as “just mixing up colors,” and grew frustrated when attempting to complete assignments when colors are involved.When he found out that Southland had pairs of Enchroma glasses that could help him, he immediately checked one out and saw that it made a world of a difference. He now uses them regularly for certain classes.

“The glasses helped a lot, and wearing them wasn’t what I was expecting at first,” Ruechel said. “I wear them occasionally, depending on what class I need for them. It was really cool.”

After wearing a pair of the Enchroma glasses, Mullenbach was stunned by the detailed colors around him that were long muddied and mixed, but were now vibrant. It seemed as if there was another world that existed, and the glasses gave him a window to look through it.

“I was pretty shocked to see some of these colors,” he said. “I was never able to pick out apples on the trees outside, and now I can see them. I wore them during a freshwater ecology class, and while we were driving out there, it was such a big change in color. Things I’ve never noticed during my day-to-day life, I finally got to see it.”

Hearing about students like Mullenbach and Ruechel affected by Enchroma glasses was a testament to how a change could lead to a positive outcome. Knutson said she would continue to see if the district could purchase more glasses in the future.

“It makes me happy,” she said. “When I heard they saw apples on trees or wanted to tell me what they saw today, or seeing the excitement for the younger ones who can draw a rainbow without reading the words and putting them in the correct order, it’s because they saw it through the glasses and seeing that difference makes me happy.”

Three Austin High School alumni will be honored next week for their career achievements as part of the annual Homecoming... read more